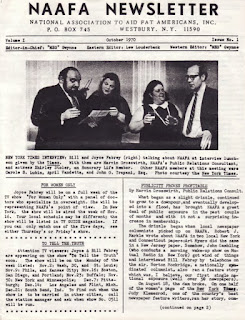 I can't remember when I first heard about NAAFA, it must have been some time in the 1980s and, like most people back then, I was amazed that an actual organisation of fat people could exist. It is still an amazing thought, evidence that fat is a social and political identity, that fat people have agency, community, ambition. That NAAFA has been in existence for so long also suggests that fat people have histories and cultures too. These remain radical ideas in a present day context where fat people are usually rendered as passive and pathetically grateful recipients of medical magnanimity.

The group has been through many incarnations, there is a newsletter that has been running for many years, on and off, and the annual conventions have been important meeting places for decades. NAAFA has also spawned a number of spin-offs, I'll say more about them in later posts. NAAFA is frequently positioned as the only way that people do fat activism, particularly by researchers and media-makers who have little other contact with the movement. This is a problem because it obscures the many ways in which fat activism manifests and presents the movement as relatively conservative and as a product of middle America. Despite having a constitution, NAAFA has struggled throughout its existence with problems to do with leadership, membership, direction and resources. It is an important organisation, but not one that necessarily reflects the interests of fat activists; and how could it? We are a very varied bunch.

NAAFA was established primarily by William Fabrey supported by Llewellyn Louderback. John Trapani and Eileen Lefebure helped Fabrey write a constitution and a number of people came together on 13 June 1969 to endorse it. I have found it hard to work out who was there, some names are incomplete or obscure on the documents I have been able to dig up, but Joyce Fabrey and Ann Louderback were present, as were a pair possibly called Susan and William Blowers, and two people called, maybe, Gilberto Guandillo and Mary Ellen something. No doubt there are people – Bill, are you reading this? – who can fill in the details and I will edit this post later.

Given the significance of the organisation the obscurity of these details is alarming, don't you think? During my trawl of fat activist archives when I was researching my book, I found little relating to NAAFA, which is extraordinary and worrying. I was hoping for large repositories of newsletters, convention materials, news clippings, internally-produced histories and publications, perhaps oral histories. But I did not find them. Do they exist? If so, where can they be found? If not, this means that important details and histories may well be lost. This would be a tragedy.

For fat people's histories to exist, we have to treasure them, produce them, maintain them. This involves understanding our lives as being important enough to remember and understand, a hard thing for people who experience a lot of social hatred and denigration. As I see it, a vital part of the work of fat activism is about collecting histories and developing intergenerational conversations. People don't live forever and when they are gone, so too are their memories and insights for the most part. Unless we preserve these important scraps of information for ourselves and for others, I truly believe that we are lost and have little to orientate ourselves towards. I also think we are selling out the fat people who will inevitably come after us, who will certainly have questions about the past.

If anyone wants to take on the work, I have to say that a really expansive, critical and well-researched account of NAAFA is something that I would love to read. Imagine a giant oral history! Meanwhile, there are some historical documents online that are worth a look. The NAAFA website has a small archive of more recent newsletters. The Big as Texas gathering in 2001 produced an excellent transcript of Bill Fabrey's recollections of the early days of NAAFA, and there are a couple of videos, which also offer some clues about this remarkable organisation.

Fabrey, W. J. (2001) 'Thirty-three Years of Size Acceptance in Perspective - How Has it Affected the Lives of Real People?', [online], available: http://members.tripod.com/~bigastexas/2001event/keynote2001.html

Posted by Dr Charlotte Cooper at 14:23

I was very happy to see your piece about the historic role of NAAFA, and certainly have myriad details in my head that are probably good to put in a history book somewhere. A few others have written about this, and a few of those can be found online, but I will have to mull that over to be more specific. NAAFA is publishing the archive of old NAAFA newsletters, one month at a time, which do exist (I have a complete set), and you have already shown Vol 1, No. 1, above! Those who I rounded up to attend the first, founding meeting in 1969, which happened two weeks before the Stonewall riots in NYC (which has been called a defining event for gays and lesbians in the USA) were a conservative bunch who were unfortunately disinclined to approach size acceptance in a way that became common with the gays and the feminists. You got most of the names right. Gilberto Granadillo was an electrophysics graduate student from Venezuela who was my lab partner one semester; he was shocked when I informed him how fat people are treated in the US--he said that was very unheard of in his country, but of course, it has worsened since then as anti-fat hysteria has spread throughout the world. William and Susan Blowers were friends of mine from engineering school whom I recruited, and Mary Ellen Gwyne was a writer from the West Coast who didn't physically attend, but was mentioned as a co-founder in the Constitution. Many of these people have died or have not been heard from in many years, but Bill Blowers recently wrote a book about the Titanic. Lack of documentation about the early years of NAAFA and some other parts of size acceptance can be attributed, in some measure, to the fact that the Internet and the web were not invented until 2-3 decades after everything got started.

Details about the dynamics of all that has taken place will probably have to wait for my memoirs, which I haven't had time to write, not being certain whether there is any audience for it, and also I have plenty of time left to write it, since I am only 75 years old... :-)

PS - I was only 27 when I started the organization. At the time, I thought we would be able to turn around the public's attitude in 10-12 years--silly boy that I was. Well, my degree was in engineering, not sociology!

Bill, as ever I am grateful for your clarifications and accounts. I hope you go on to live a great many years, but I am also concerned that the loss of your depth of knowledge and experience will be a terrible blow to the movement when your time comes to go.

Writing a memoir may be too much for you, it's a big undertaking, but do you know any oral historians? How would you feel about giving an oral history about your involvement in fat activism? This could be a way around preserving a legacy and your powerful contributions.

Also, I hope you have an archive in mind to host the full set of newsletters once you and yours no longer have any need for them. These are surely a vital source of information for present and future generations of activists, historians, scholars and fat people in general.

Charlotte, thanks for your comments and suggestions. Due to the recent passing of dear friends and family, naturally I am giving more thought to estate planning and archival issues. I am cooperating with NAAFA officers to make sur, for example, that an archive of newsletters and other documents don't permanently vanish, and are easily accessible to students and other researchers.

I am really, really glad to hear this Bill.