The inaugural Queer Zine Fest London was held on Saturday and it was really fantastic. Loads of people came, there was a great diversity of zine-making present, and Erica Smith, the first person to publish any of my work, gave a cracking talk about GirlFrenzy. The space hosted two excellent exhibitions alongside the event, Melanie Maddison's Shape & Situate, and Music & Liberation. It felt like a super-abundance of wonderful stuff and was seriously overwhelming.

I represented at the Fest in various ways: giving out copies of new zines; having work in the Shape & Situate exhibition and being featured as one of the "inspirational European women" in its roster (!); seeing many zines to which I have contributed, and reconnecting with folks I've met along my zine way. I also gave a little Show and Tell type talk about my life in zines.

My zine production is different to my fat activism, but they often overlap, so I talked about that a bit, and I though I'd share some if it here too.

I met my partner Simon Murphy in 1990. He had been publishing a zine called, variously, Advenutures in Bereznik and Attack on Bereznik, since the mid-1980s. Mostly music-based, it incorporated odd articles and beautiful graphics. I had been reading similar music zines by guys for some years before meeting Simon, so we had a shared language of what constituted a zine.

In the early 1990s there was a thriving community of small press comics makers in the UK. Caption was instrumental in developing the scene, as was the Small Press Fair, and Peter Pavement's Slab-o-Concrete press in Brighton.

Bolstered by our shared interest in zines and small press comics, and the support of a community of makers, in 1992 Simon and I published a comic together called All Right. We made two issues, with me writing some of the scripts and Simon doing the lion's share of the work. All Right was a jumble of in-jokes, alter-egos, cuteness, and stuff that we found amusing.

This is a long-winded way of saying that this was the first time that I was able to contribute to representations of myself as a young fat woman. Simon drew me as he saw me: as loveable, gorgeous, badass. My fat activism was in its early stages and it was really fun and exciting to see myself as a cartoon character. I know that other fat activists have used cartoon forms in various ways, Cindy Baker's rendition of herself as a mascot also springs to mind. For me, it was a way of playing with my fat identity and possibility for my fat self. 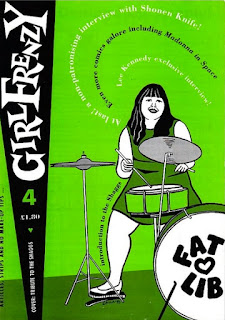 It took a long time until I had the confidence to make zines by myself. Instead, I contributed to other people's zines (I still do). This is how I started getting published. Two zines were really important in helping me build confidence in my fat activism, writing, and feeling that zines were the place for me.

GirlFrenzy was published by Erica Smith through six issues and a special one-off book-size Millennial. A small press comics magazine, GirlFrenzy was feminist but not like the other feminists I had known up until that point, it took more of a third wave, sex-positive and queer sensibility. Erica was an absolutely pivotal person in giving a huge hand-up to a community of British feminist small press comics makers, graphic artists and writers. So it was with me. GirlFrenzy was not purely focused on fat stuff, but Erica was open to discussion about it and broadly supportive. Hence number four was a special themed fat lib issue, to which I contributed.

The feminism that I encountered through GirlFrenzy orientated me to FaT GiRL, the legendary zine to which I also contributed pieces more or less throughout its lifespan. FaT GiRL was important to me in so many ways, not least that it gave me a way of understanding myself as a fat dyke, it melded fat with queer-feminist-punk ethics and aesthetics and early intersectional politics, and it introduced me to a community of people who are still very central to my life.

This apa zine deserves a special mention because I don't know if such things exist any more. It really was of its time and place. I don't know if Living Large was typical of apa zines more generally but this is how it worked:

There was a membership group who contributed a small amount of money to get the thing printed and posted. Everyone was North American apart from me. Every month or so we'd write a little column and send it off. This usually took the form of an open letter to other members detailing our news, flyers and ephemera we'd come across, and direct comments to other people. Living Large was all about fat, so that was the focus of the things we'd write, sometimes it was about our opinions, but mostly it was about how fat impacted on our lives and the everyday activism we undertook around that. A central mailer would copy and collate the contributions and mail them out to everybody, stapled together as a zine.

Living Large was like the paper version of an email list or a messageboard. It meant that we had a little community of contributors in discussion with each other over months and years. Because it was a closed community, in as much as you had to contribute a little photocopying and postage money, the conversations were quite intimate and friendly.

I was a part of Living Large for a couple of years at least in the mid-1990s. I don't know what happened to my back issues, but it had been going for quite a while before me. I have number 44 on my desk. The internet meant that Living Large eventually became redundant, but in its prime it was a great way of keeping in touch with other fat activists across a wide geographical divide; many of us were otherwise pretty isolated.

I've made many zines by myself and in collaboration, and some of my zines are part of a series whereas others, like these below, are one-offs that relate to fat in some way. 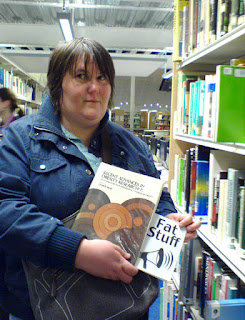 Fat Stuff
In 2006 the student services at the University of East London, where I was studying at the time, decided that it would be a good idea to host an Obesity Awareness Week, having swallowed fat panic rhetoric hook, line and sinker. Exasperated by all this, I made a tiny zine that offered a critique of Obesity Awareness Week, a list of fat activist resources available in the library, and a bunch of things people might want to do instead of participating in the uni's nonsense. I distributed them around the campus.

Things That Help Us Feel Good
In 2007 I devised and facilitated a fat activist workshop with a group of 13 and 14 year old girls for The Wellcome Institute. We made a zine together, drawing and writing a page each about what helps us feel good. I copied it and everyone got copies to keep and give away.

NOLOSE
The fat queer motherlode has supported a couple of zine projects in more recent years. In 2008 their small projects fund enabled a group of us to make a fat zine, called Big Bums, and distribute it for free.

In 2011 NOLOSE provided the impetus for my zine-based project, A Queer and Trans Fat Activist Timeline. Starting out as a fat-feminist-queer-trans community history workshop at the 2010 gathering, this morphed into an object that travelled and was discussed and archived, it became an artist's residency, from which a paper zine was produced, then an audio zine and a digital download. I also published an academic paper about the project and the way it shifted and changed.

I've been reading and making zines for a long time, and have no plan to stop. Zines have brought me personal and professional delights. I still make my own, and write for other people's zines. I still try and work on the basis of making something for free, with low production values. What's changed over the years is that now I am more serious about distributing and archiving my work, and I'm considering longer-form digital publishing. Zines are the place where I am most myself, where I say what I really think, and where I'm least apologetic, including how I talk about fat.

Posted by Dr Charlotte Cooper at 15:37