I've been looking at copies of Fat News. This is a newsletter that was produced by the second Fat Women's Group in London in the early 1990s. Both the newsletter and the second incarnation of the group were my idea, I think. The group caused me a lot of pain, I had no idea what I was doing and there were also tensions towards the end of my involvement that I still don’t understand. I ended up leaving, the group changed a bit and then, as far as I know, it stopped. Whilst it helps to think of burn-out and problems with group dynamics as common pitfalls of activism, these difficult memories have made it hard to reflect. 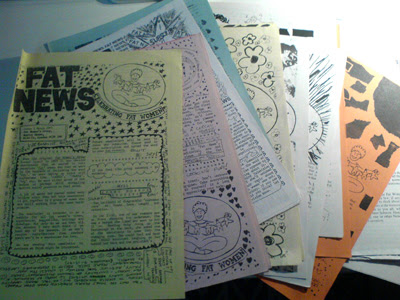 Fat News is the only tangible artefact I have of this period. 15 copies were published March 1993 – September 1996, though I don’t think I was involved with the last few. I remember seeing copies of Shocking Pink, which was this fantastic girl's zine produced in South London in the late 1980s, and loving how it was put together irreverently. I had no idea how I could have got involved in Shocking Pink, I think I probably thought that I wouldn’t be welcome there, I was so alienated from people at that time.

I stole some of Shocking Pink's production techniques for Fat News, which was that we would invite people to write content for it, and write some ourselves, and then everyone in the group would be responsible for cutting and pasting a page and decorating it with doodles and comments. Then someone would take it to the printer (we used the National Abortion Campaign's copier) and we'd get together to collate it and post it out to subscribers. Someone else in the group would be responsible for maintaining the subscriber's list and printing out address labels. I don’t think anyone else in the group had any involvement with small press, independent or zine publishing, and I remember it always took a lot of work encouraging people to draw or write on the pages they were pasting up.

I feel pretty sad when I look at Fat News but I'm sure other people don't feel the same way. We had some great feedback for it in the group, people loved it, and I remember how important it was to make something in which people who lived far away could participate. I remember recording audio versions of it too, it was exciting to be able to make accessible media.

The Women's Library in London have a partial set of Fat News, if you’re interested in British fat activism from twenty years ago – and why wouldn't you be?! Otherwise you can come over and have a look at my precious copies.
Posted by Dr Charlotte Cooper at 11:20

sounds absolutely fascinating, sad feelings notwithstanding. Why not post a couple of articles online? Just to see how activist goals have changed, or see what progress has/has not been made would be great.

No, I feel too sad about it.

I'm sorry to hear you feel too sad about it to share. I hope that changes someday, as I'd love to see it, but don't think I'll be on the right continent any time soon.