In 1967 Llewellyn Louderback published an article in The Saturday Evening Post called 'More people should be FAT'. This was one of the first, if not the first, pieces of critical writing about fat in the popular media in the US. The article was read by Bill Fabrey, who contacted Louderback, and it helped spawn NAAFA and everything that followed.

The article is pretty compelling several decades later, I think. He makes a good case for abandoning fatphobia within a context where such claims would have been seen as pure oddball territory. It's pre-feminist, Ann Louderback gets mentioned but does not have a voice of her own in the piece. Given the influence of feminism on fat activism, it's strange to see its earlier focus on men. I like Lew's lively prose and would direct readers not only to his book Fat Power but also to his genre novels, which he wrote for a living, especially the lurid Operation Moon Rocket.

Louderback is still around, though sadly Ann died some years ago. I had the pleasure of meeting him in 2009, and we correspond from time to time.

The article is predictably obscure but, by magic, I have a copy of it. Here it is, hot off the scanner. 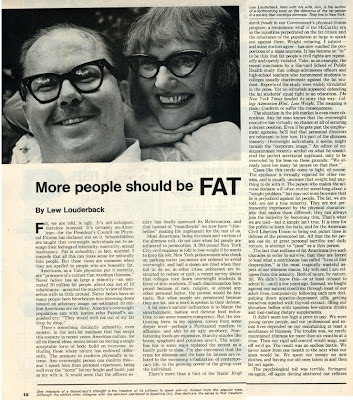 Well that just sums it up beautifully; it's all there, and it's a crying shame we still have to repeat it, again and again. Thanks for posting.

Yep. The repetition is depressing but also not surprising since this old stuff is obscure and people don't have access to their fat activist histories.

I have Lew's book! A gem of a find from a vintage book dealer. A man ahead of his time :)

Damn. It could have been written yesterday. And that's why it both thrills and depresses me.

I love how he quotes some one (who?) about "lives of diet desperation", and emphasizes, as too few do now, how dieting makes you sick: sad, obsessive, cranky, weak, and so on.

Thanks so much for making all this history available to us.

I can't read the article. Can you make it bigger?

But you can probably alter your browser's settings to display text larger, that will probably help.

I wanted to print it out and show it to some of Lew's admirers.

He is a very interesting man with a wonderful way about him.

Yes, he is a wonderful man.