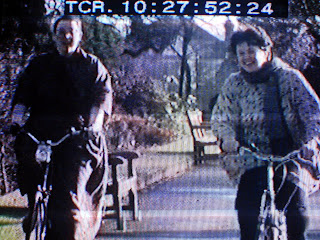 Although my awakening as a fat activist was spread out over a long period, and although I still feel that I am undergoing a continuous kind of awakening around it, I can pinpoint 1989 as the year when I started to wake up.

I was 20, at Uni in Aberystwyth, my mum and my brother had recently died and I was frozen with grief, and I had a horrible relationship with a guy who wanted me to lose weight. During this dismal time I got a copy of Shelley Bovey's Being Fat Is Not A Sin, I may well have come across Shadow On A Tightrope, I heard about the Fat Women's Conference and the group that organised it in London and saw them talk about it on Terry Wogan's chat show. It's possible I read the articles that Spare Rib published about this new British fat activism, and I watched the Open Space documentary Fat Women Here To Stay on BBC2.

Today, 22 years later, I watched that documentary again. There's a viewing copy at the British Film Institute so I went and paid the fee, a massive £3.60 including VAT, and a friendly technician set it up for me at a viewing station.

I don't know much about the BBC's Community Programming Unit or Open Space, although I appeared in a later Open Space documentary made by Mary Evans Young for her Dietbreakers project in the early 1990s. I think the idea was that there were a number of slots available for people in the community to make their own programmes and maintain editorial control. The programmes were then broadcast during prime time on BBC2. 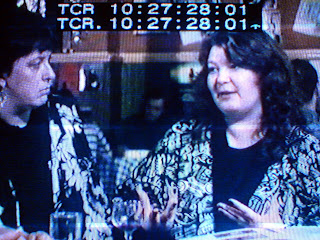 Watching Fat Women Here To Stay this morning, I was struck by how much and how little had changed in two decades. I think fat activism is slightly less obscure than it was, and parts of the discourse presented by the documentary have muddled their way into more mainstream spaces. Fat people are a lot more visible too, not just as subjects of a moral panic, but also as subjects for a television industry that needs to churn out a mass of sensationalist and cheap programming. But Fat Women Here To Stay is a very different entity than, say, a fat-related shockumentary in 2011. Mainstream, prime-time programmes where fat activists, or any 'political extremists', have editorial control don't exist.

Back to the prog. It covers the ground you'd expect: reclaiming language, discrimination, clothes, health, relationships, media representations, that kind of thing. It upholds healthism in a way that would be seen as problematic today, and its critique of fashion and advertising is flimsy. It's very earnest and somewhat naive, which makes it unintentionally funny at times, though never in a mean way. The fatshion is striking, voluminous printed tops and dangly earrings are the look for fat feminism in 1989.

My life has changed beyond anything I could have imagined for myself back then and the way I watched Fat Women Here To Stay today is very different to the way I originally viewed it. It's a credit to the programme that it can keep someone's interest beyond a Fat 101 stage. Here's what I really liked:

The presence of working class, angry, dykey feminists. Although the section on Jane Meacham's fatphobic sacking was heart-breaking, her defiance, and the support of her defiant family, is and was really inspiring, so many people would be crushed by the treatment she had to face. Mandy Mudd told it like it is, and I noticed that the women were very careful with pronouns when talking about partners and relationships! 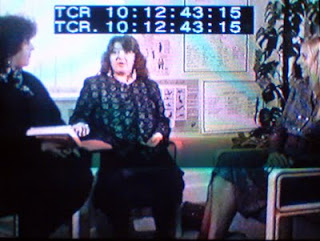 The sequence in which the London Fat Women's Group calls up the long defunct City Limits magazine and berates them for publishing fatphobic lonely hearts adverts. The Advertising Manager on the other end of the line immediately derails the conversation by alluding that the group are sell-outs for working with the BBC, to which Heather Smith replies: "There's never been a programme on British TV which has been positive about fat people, and we just have to use it as any other oppressed group would use the media, even though as a whole it may produce some oppressive programmes." God, she is on it! There's another great sequence in which, along with Barbara Shores, she tells a representative from Jenny Craig that she is a tool of The Man and takes no prisoners.

The clips of mainstream comedy shows Allo Allo and Russ Abbott denigrating fat women are fascinating(ly awful) to see. Russ Abbott interests me because his show was a platform for fat comedian Bella Emburg, so he supported a fat woman's career whilst defaming fat women in general. I don't watch much mainstream TV comedy so couldn't tell you whether fat jokes have changed since then or disappeared, maybe they've become more subtle, or maybe the way fat women are depicted has shifted more towards disgust and pity.

On the other hand, the sequence where three members of the London Fat Women's Group enthusing about Baghdad Café having just been to see it at the Curzon Soho is delightful. This is a film I love too. If I have one big criticism of the programme it is that it could do less hand-wringing and more badassery to show how life-affirming and liberating fat activism can be, especially in terms of making and consuming our own cultural production. I have been criticised by other fat activists, including my early days heroine Shelley Bovey who has since somewhat disowned the movement, for paying insufficient attention to the dreadfulness of fat experience. It can be dreadful, this is true, but I cannot live a life that is solely focussed on oppression without also taking into consideration its resistance and the necessary pleasures of making our own liveable lives through creativity and community. This is an important means if survival, a way people can thrive. In this way I think the artist Rita Keegan's presence in the programme is crucial and I wish she'd been in it more. 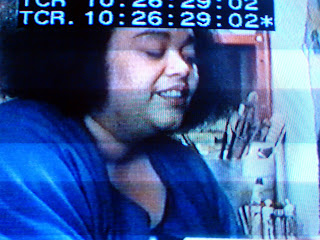 Anyway, at least I got to enjoy Angela English's poetry and a group of women singing a very sweet fat liberation song at the end of the programme. It's sung to the tune of Que Sera and has the lines:

Now I know women can be strong
And we must struggle to set ourselves free
Fat women healthy, happy and proud
Fighting for liberty

I have some ideas why the London Fat Women's Group and the second Fat Women's Group ended, which makes watching Fat Women Here To Stay a bittersweet experience. I would really love to meet the women who made this programme, especially Heather Smith, so far our paths have never really crossed. I'm so glad this programme was made, it’s still a remarkable piece of work, and an important part of my own radicalisation.
Posted by Dr Charlotte Cooper at 22:46

Thanks and no, not as far as I know.