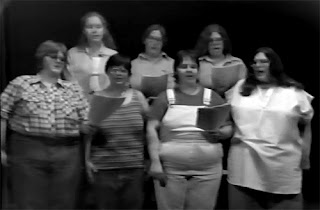 A couple of weeks ago I wrote about what it was like seeing the Fat Underground video.

A generous reader of this blog, who may or may not wish to be named, shared a digitised copy of the video with me. With her consent I have uploaded it to YouTube for others to see. Watch the Fat Underground video from 1979.

Edited to add: I watched the video at the weekend and realised that it is different to the video that I referred to in the other post. I suspect the other video that I saw at the GLBT Historical Society in San Francisco in 2010 is Shirl Buss' original 1975 footage, edited and embellished here by Marge Dean. This begs the question: could there be other Fat Underground videos out there?! Meanwhile, it would be great to see the 1975 video digitised and made available too.

By the way, I am thrilled to notice in the credits that Kathy Fire is one of the chorus. Her album, Songs of Fire, is a classic of protest music, a favourite of Homosexual Death Drive, and still available through the Smithsonian Institution. It makes sense that she was also a part of early fat feminism.

There are some things to bear in mind:


I can't believe other fat activists are going to get to see this video now, after all these years. What will it spark?