Cass Elliot was a singer, a scenester and an icon of 1960s sunshine pop. She was a Jewish woman, born Ellen Naomi Cohen. She was also fat in a time and place, not to mention industry, where this was a no-no. For all the rhetoric of the Summer of Love, Elliot suffered from fatphobic discrimination throughout her career, and in her personal life.

She responded to this in a variety of ways: by performing songs that celebrated individuality and difference, through crash dieting and substance abuse. She died in London in 1974 at 32, but had collapsed three months before then, and endured a string of humiliations in the meantime.

A post-mortem examination found that she had died of a heart attack. One can speculate that her substance abuse and crash dieting played a part in this. Predictably her death was reported as a result of her being fat, a way that diet industry mortality is obscured which still continues.

During the post-mortem, no food was found in her windpipe. Yet Elliot became the subject of a vicious fatphobic urban myth – that she had choked to death on a ham sandwich. This myth persists and is usually delivered with a smirk. Mike Myers, wanker extraordinaire, jokes about it in his Austin Powers film inbetween fat-suiting up.

The lie that she died in this way emerged during initial speculation after her body was found. Police told reporters that a half-eaten sandwich was in her room and may have been the cause of her death. This speculation is built on the stereotyping of fat people as voracious and reckless eaters. Elliot was subjected to fatphobic abuse even in death, decades after her passing. We are the butt of jokes when we die tragically young.

Elliot's life and death are significant to fat activists. Living in Los Angeles in the late 1960s, it is possible that she knew of the activities of early fat feminists in that city.

In August 1974, a month after Elliot's death, a group of fat feminists memorialised Elliot at a Women's Equality Day celebration, which took place in a local park and where the Fat Underground had a booth. Sara Fishman recalls:

The Women's Equality Day celebration included an open microphone and stage. When our turn came, members of the Fat Underground, members of the Fat Women's Problem-Solving Group, and some of our friends moved onto the stage. We carried candles and wore black arm bands, in a symbolic funeral procession. Lynn spoke. She began by describing the inspiration Cass Elliot had represented to us, as a fat woman who had refused to hide her beauty. She ended by accusing the medical establishment of murdering Cass, and (because they promote weight loss despite its known dangers) of committing genocide against fat women.

For the next few weeks, we were local heroines. The Los Angeles feminist news paper Sister devoted a full page in its next issue to Fat Liberation, with a photo of our Women's Equality Day demonstration on the cover. Publicly, at least, local radical feminists began to acknowledge fat women's oppression as a problem they would have to take seriously. 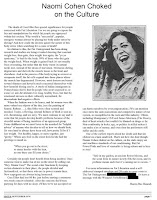 Certainly fat people don't benefit from being insulted. Once someone tried to make fun of me on the street by calling out, "Hey, Mama Cass!" The social order functions by keeping certain elements in their place, the people divided and factionalized, so that those who are in power remain there. New scapegoats are always being harnessed. […] One of the earliest reports about her death said that she choked on a ham sandwich. That's not how she died though: Naomi Cohen choked on the culture, on the stale empty air and worthless standards of our conditioning.


Mabel-Lois' eulogy remains a pivotal moment for fat activists. In 2006 Amy Lamé produced a show about her own relationship to Elliot's music and memory. Allyson Mitchell mentioned to me a while back that there would be a performance of the event in Toronto in 2010, a historical re-enactment of it, but I have not been able to find documentation of that.

However, during the research for my book Fat Activism: A Radical Social Movement, I discovered a tantalising piece of information, which is that the protest was filmed and that the Getty Research Institute may have some video of this event. This may be false information, there is a Fat Underground video, which I have seen, but it does not include events from the protest. Perhaps fat activists in Los Angeles could chase this up.

Thanks for posting this! Just by being fat and famous she was an activist like Nell Carter! I love stories from the first wave of fat lib. Those folks are coolest.