I started this series of posts last week with the 25,000 year-old Venus of Willendorf and from there I'm jumping straight to 1967. What happened in the middle? There are cultural historians of fat and weight loss who can fill in some of the gaps, Elena Levy-Navarro, or Hillel Schwartz, for example. But the genealogies of fat activism that I am interested in kick-in towards the end of the 1960s.

In my book, Fat Activism: A Radical Social Movement, I plot the beginnings of fat feminism in an event produced by the WBAI radio host Steve Post on 4 June 1967 (some sources say it was on 3 June) at Sheep Meadow, Central Park, New York City. Around 500 people turned up for the spectacle, which I describe in depth in my book.

One of the sources I used for this section was Steve Post's own autobiography, published in 1974 and long out of print. I found a digitised copy floating around online at AmericanRadioHistory.com around the time that Post died in 2014. I can't tell you how excited I was to find this document. Although there were newspaper reports about the Fat-In, up until reading Post's own account I had never seen pictures of it. But here not only was there an explanation and description of the Fat-In by its creator, but a few pictures. I'd often wondered if I'd imagined this event because it's such an oddball moment in time, and weirdly influential, but here was proof that it really happened. Maybe there are other photographs out there too.


On 20 March 2015, a memorial service was held for Post at Symphony Space in New York. On the stage was his Fat-In placard. He hadn't continued to have a public life as a fat activist, but I guess he kept a placard from the day, it must have been important to him but I wonder if he ever knew just what it had helped spark.

By the way, I can easily draw a line from The Fat-In through the beginnings of NAAFA, The Fat Underground and beyond to things happening today. But thinking of the Fat-In as the beginning also obscures fat feminist roots in the civil rights movement. This may be one of the ways in which people of colour could have been hidden in fat activist histories. There doesn't have to be one starting point, there can be many concurrent roots. Perhaps there was an equally important event, or series of moments, that inspired fat feminists who came out of civil rights. If you know about this, if there is any evidence, please share what you have.

Fat Activist Vernacular and other zines

I have been making zines – small homemade publications – for some time and I have just published two new titles. Buy them here.

As I was finishing up my book, Fat Activism: A Radical Social Movement, I thought I'd take the pressure off a little by writing a zine. 15,000 words later I ended up with this behemoth, and there's still so much more to be said.

The Vernacular is a list of words and their definitions, like a dictionary, but a lot less formal. I wrote it because I thought people not in the know might like a glimpse of the subcultural riches of fat activism, and because activists might like to read about some of the beauty that our movement has generated. The zine is funny and serious, a deadly combination.

"When you talk about fat people the language of power is the language of medicine and public health. But the words I have collected here are words that subvert that power."

Some examples from the Vernacular:

Disease
It has become a popular view amongst obesity experts, that being fat is a disease. Some of them think it is contagious. This is part of the on-going project to medicalise and control fat people, which they depend on for a living and for their status as experts.

Doctor
The boss of you and everything.

Draw attention upwards
Wear a piece of jewellery, a scarf, a fancy collar, or have huge hair to direct attention upwards towards your face and hope that people don't notice your apparently awful body. Pernicious and pathetic fashion advice of yesteryear.

Drugs
A million goldmines will erupt for whichever corporation finds the magic pill that makes fat people thin and keeps them coming back for more. The race is already on. Meanwhile, weight loss drugs have significant side effects including feeling wired, getting an eating disorder, major organ failure, pants-shitting, impaired cognition and death. Some need injecting a couple of times a day and at the moment you are unlikely to lose a lot of weight on any of them.

Dummies
Fat dummies are used by health professionals and firefighters, and possibly others, to train people in how to handle fat people. They use dummies instead of talking to fat people.

This is an autobiographical zine with stories from my life told through happenstance meetings with creatures.

The vignettes include ants, a bearded fireworm, horeshoe crabs, birds, deer, fruit bats and many more. The zine explores different themes, such as regret, transformation, ethics and magnificence. A quiet zine.

The zine is about me being out in the world as a fat dyke, and a fat girl, someone who isn't assumed to have much going on. It shows me as an embodied, thinking, feeling person.

"I am in Germany for a period of time, feeling deeply alone and preoccupied with a lover. I am supposed to be more sociable than I feel so I make excuses and take long train journeys across the land as a means of making time to be by myself. It is spring and there are many hares in the fields as the train goes by. Hares are my favourites. They're not cute like rabbits, they run and fight, their legs are long, holding them high off the ground, they are mystical and lovely in art. I get to my destination, walk to the beach and lie face down in the sand for several hours, fully clothed, in a restless sleep."

Get copies of my zines

Throughout my zine-making life I have made small runs of zines very cheaply to give away for free. I will keep doing this, but now I'm interested in writing longer zines which require more production.

I have built a little online shop where you can buy my zines. Fat Activist Vernacular and Encounters with Nature are up there, as well as Simon Murphy's exquisite zine Different Times, in which I feature, about queer, drag, punk and disability in London during the 1990s.


Posted by Dr Charlotte Cooper at 14:25 No comments:

Roots of fat activism #1: The Venus of Willendorf

To celebrate the publication of my book, Fat Activism: A Radical Social Movement, I am doing a series of blog posts about some of the stuff I came across during the research period that people might not otherwise get to see. Just to be clear, I don't mean that my take is the only possible take on fat activism. I think there are many fat activisms and many roots. I am talking specifically about the roots of my fat activism. 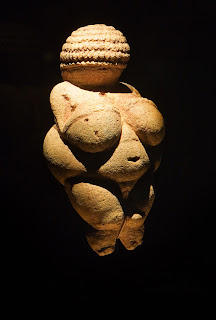 1. The Venus of Willendorf

The Venus is a statue of a fat black woman that was dug up by archeologists in Austria in 1908. She's at least 25,000 years old, and maybe the earliest carving of a human. She's fat and I'm not talking chubby.

She's an important figure for fat activists because she shows that people have known what a fat person looks like for a very long time. She disproves the rhetoric, popularised by the War on ObesityTM that fat people are a recent aberration, the product of junk lifestyles.

I'm calling her a black woman because of what I take to be her hair, it looks braided and black to my 21st century eyes. There are counter-claims that her head might not be a head at all, but a handle for an object. It is important to make people of colour visible within fat activism, and it would make sense that this figure who represents a root of some kind, should be black within a present-day activist rhetoric of centring black people. Maybe activists of another time would see her differently. In claiming her as black, fat activists might also want to critique the naming of her as venus (there are other venus figurines too), which has racialised connotations, and her positioning and interpretation within Western archaeology.

Edited to add: Karen D. has noted that the Venus can also be seen as disabled. This makes me think about how much of her is obscured by taken for granted claims.

Whether the Venus herself is a fat activist is also fodder for conjecture. She's usually called a fertility goddess, perhaps based on colonial anthropological assumptions about fat black femininity and the depiction of genitals. My feeling is that she could represent anything because the person or people who made her are now dust themselves, and people now will never know about her original context. Interpretation is all we have. To me, her existence is enough in itself and, as far as I'm concerned, it all starts with her.

What I do know is that she remains a powerful figure. You can go and see her in the Naturhistorisches Museum in Vienna. You might also want to search for vernacular images of her online, Venus of Willendorf tattoos, for example, or Venus of Willendorf crafting. I like it when people embellish her by adding feet, a face, a setting, nipples or whatever. Sometimes she's fatter or has bigger tits, as though people now want her to be more than she is. This perpetual re-engagement shows that she is still relevant and that her age just makes her all the more compelling.