We're coming to the last couple of weeks of rehearsals for SWAGGA before our week's run at The Yard. Come and see us!

What a ride it's been so far. Here are some highlights:

The biggest thing that has changed over this development period is that we are working to music that has been specially made for the piece. The composer Verity Susman, also of Electrelane, has created a score for us and the band Trash Kit will be performing live onstage with us during the show. I'm saying this in a matter-of-fact style, but the reality is that we are dancing to our favourite musicians, to music they have made with us in mind, with people who are very important to us as artists and community. It is thrilling beyond belief to be working in this dynamic, mixed, interdisciplinary way. Just the other week we were practising with Trash Kit at Chisenhale Dance Space, improvising movement whilst they freestyled around us. The interplay felt incredible. I am so excited for audiences to witness this.


Last Saturday we previewed SWAGGA in at Watch Out, a festival of dangerous new performance at Cambridge Junction. We are dangerous! We performed at an odd time in the afternoon but managed to attract a lovely audience. The space was really good to dance in. It's funny, when I'm dancing I am aware of the audience and they certainly feed the piece and give it energy, but it's also a very internal feeling. I am closing in on feelings and thoughts that drive the movement, I'm very focused, in a kind of flow of body and mind. I no longer worry about my body not being able to do things because I know it can. I'm aware of being seen, and also in quite a private state. It's hard to tell what it feels like, it's enjoyable and also work, effort. Whilst I was in this flow state in Cambridge, I was aware of a sequence dancing with Kay through millions of tiny dust motes lit up by the side lights. It was as though we were dancing in a giant, golden sno-globe.


A few weeks ago we did a run for a group of people in order to solicit some feedback from them. It's useful to listen to the things that people say when you are deeply embroiled in something because you can get a bit snowblind. One person turned up to the sharing, he knew nothing about the piece, his dance practise was different to ours. He said some things that stung and I don't think he realised this, he was just saying what he thought. The sting was the first time in the project that I felt diminished as a dancer and it caused some past insecurities to surface for a while: I'm too fat, I'm too old, I can't move, who am I kidding that I could do this? Re-entering the work put those voices in their place but what I have been left with is the astonishing realisation that in over a year of making SWAGGA this is the first time I have encountered views such as that man held. I thought dancing would entail fighting people that didn't want someone like me to be dancing but my experience has been the opposite. I'm sure this is because of the communities of dance that I have started to be a part of, their values and aesthetics. But what I have found is a hunger and eagerness for people with bodies like mine to be part of things, and a lot of support along the way. It is extremely humbling.


One of the ways in which I have been encountering different forms of dance and community has been through The New Empowering School, a series of workshops allied to SWAGGA. Every week about twelve of us meet and have a go at something under the stewardship of a performance practitioner. So far, Florence Peake, Matthias Sperling and Vicki Igbokwe have taken us on a journey of release work, collective movement and club dancing. Charlie Lee George has been blogging about her experiences over at Fishing for Dragons.

We are about halfway through the School and it has indeed been an empowering thing. We have been working in a beautiful studio at Arts Admin. It's actually a space where the choreographer who introduced me to dance in the 1980s works with his company. We work amongst their belongings: a baby seat, biscuits, boxes of clothes, equipment. It feels as though I've moved from being in the audience to seeing what goes on behind the curtain. I can't believe I now know what a studio is like, what a dance class is like, how it feels to enter a dance space feeling limited and being able to contribute and take things from it regardless. I've had a life thinking that these things are not for the likes of me. I am starting to think about how my life as a dancer will develop beyond SWAGGA, which is a great gift that Alexandrina Hemsley and Jamila Johnson-Small of Project O, the initiators of all this, have given me, and one that I hope to pass on in my own way.

Posted by Dr Charlotte Cooper at 11:53 No comments: 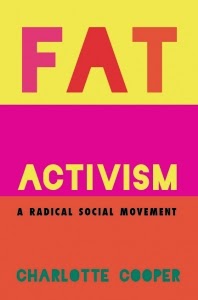 I'm extremely happy to announce that I have a new book coming out in January 2016.

The book is based on my PhD research, expanded and made accessible for a broad readership. I hope you'll want to read it

Fat Activism: A Radical Social Movement will be published by HammerOn, a fantastic small press specialising in books for and by feminists, queers, nerds and weirdos.