It's been about a year since I started dancing with Project O. I am now well-acquainted with five dance studios, a rehearsal basement and a couple of stages. I feel as though I have infiltrated spaces that were previously excluded to me. I have come to know Jamila Johnson-Small and Alexandrina Hemsley, which has brought me nothing but pleasure. I'm getting an idea of how people work in dance and performance (yes, it's not easy). I am meeting other dancers and makers, witnessing and participating in different kinds of work. I am being paid to rehearse, dance and perform for this period and there is a small budget for other things relating to my life as a dancer, like physio. Not surprisingly, my relationship with my body has changed quite a bit over the past months.

Dancing with Project O has been a major life experience for me as a fat person invested in decolonising my body and developing a radical embodied practice/activism based on the liberation of all people. I now see my body as a resource I can trust and through which I can express myself. I have learned to move with a little more depth, strength, imagination. I enjoy the way I am able to move, I'm not afraid of being puffed out, of sweating, of getting tired, I see this as part of my aesthetic. I am more curious about shame when it arises and less fearful of it. I have been given wonderful opportunities and encouraged to experience my body as it is and not within a framework where gracefulness, prettiness, a kind of dancerly expertise must play out in order for my movement to be legitimate. The work of rehearsing is hard and also a joy. I feel both at peace with my body and ready to rock it. I'm very powerful, our choreographers have said this from the start and now I see it too. No wonder dance schools and spaces try to keep people like me out, they really can't handle it.

Because my introduction to dance has been grounded in black feminist class-conscious cripped queerness I am more convinced than ever that fat politics cannot be separate from all forms of anti-oppressive work. That this has been experienced through our bodies and lives colliding and not as abstraction or theory is really thrilling. There is so much potential for richness to come out of these crossover spaces. I'm really aware of this in a week where a black woman has become the focal point for the rage of a fat activist community largely represented by white people, whilst her equally if not more fatphobic white colleagues have managed to slip by, including a powerful media maker who is well-known for her fat hatred.

I am still a fat dancer and fat will likely always be a part of how I perform and am in the world. Unless I get very ill I don't see myself getting thinner any time soon and, if I did, I would have a formerly fat middle-aged body, I would not be reborn as any kind of youthful thin ideal. But the dancer part has become more prominent, I am now interested in what it is to be a dancer, what I can bring to dance with my body and experience. It's still about fat but it's not all just about fat.

Headless fatty: is this the most overused? 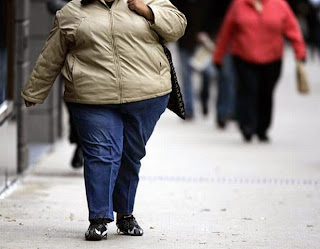 This is an image that is often used in news media to accompany stories of fat abjection. A famous headless fatty.

I find the person in this picture compelling. Who are they? They look as though they are just going about their business and yet this image recurs over and over again in the news. A small moment in time repeated seemingly forever to remind readers and viewers how disgusting it is to be like them. How might they feel about their image being sold in this way time and time again? How much profit has been made off this image? What might the person in this image say if their power to speak had not been stripped from them? I would like to read a novel or a poem, or see a film or a play or a dance piece about and by someone like this.

Obesity reporting is cranking up again following a relative post-new year lull. The papers seem to be full of this stupid crap. It's too early for swimsuit season, so could it be something to do with the election? Drive people into a frenzy, like panicked sheep? Or maybe it's academic conference season and researchers are vying for attention. Either way, there's a strong whiff of bullshit in the air.

Today The Guardian published a story based on research by Sheffield University and presented in the august Journal of Public Health. The research team has made the AMAZING DISCOVERY that all fat people aren't the same. That's right folks, you heard it, we are not all one homogenous blob of couch potatoes needing rescuing by the weight loss evangelists. Way!

The research identifies six types of fat person and argues that this stereotyping is important because it will help NHS managers distribute resources more effectively. The idea that the good healthy fatties will be harassed less by medics is being presented here as progressive and ethical. One wonders what will happen to the bad fatties.

The context in which these GROUND-BREAKING findings are being set reminds me of how fat panic produces its own set of rhetoric and that, when repeated often enough, this hot air is made real, it becomes a truth. The Obesity Epidemic is one such example but this is old news now. Instead it has spawned new, exciting ways of hating fat people though concepts such as 'obesogenic,' 'the burden on the NHS,' 'tackling obesity' and, another one from The Guardian last weekend, 'obesity of the mind.' For a discourse completely obsessed with eliminating junk food, it sure supports a lot of junk concepts.

If the tables were turned, what would things look like? What happens when the gaze is reversed? I love a listicle and so here I present to you, with great fanfare:

The six types of obesity researcher

NB. None of these people know any actual fat people other than as their grateful research fodder.

The government jerk
Imagine every episode of Yes Minister, The Thick of It, The West Wing and so on with added posturing about obesity. These researchers are blowhard masters of spin and pomposity. Found in every department, they haunt the NHS and all public health organisations. They are hard to pin down because they're always rushing from one place to another and live in some weird realm of unaccountability.

The early career opportunist
They have just spent the best years of their youth trying to get a toehold in an academy where good solid jobs are becoming very rare indeed. By making obesity their special area of interest they can claim to be doing social good and get their hands on second-to-none funding opportunities. Result: they score complementary articles in Times Higher Education and can finally afford to move out of their parents' place.

The mid-career switcheroo
This irrelevant scrote is to be found in a completely unrelated field where the research funding has virtually dried up. He (it's always he) is not quite ready to retire yet, but must justify his tenure and has seen that the grass is greener in the world of obesity. If you can't beat 'em, join 'em.

The obesity NGO bumbler
Research is a tool to legitimise the untenable and make yourself indispensible to the people with money. Usually rides a Brompton and has a very nice wife and kids at home. Beloved by journalists.

The weight loss industry creep
Research is a tool to legitimise the untenable and sell more product. Basically a robot.

The media chancer
Research is a tool to legitimise the untenable and sell more product in the form of exploitative TV shows, newspaper and website articles. They may also become a celebrity and win an award.

Missing from this list, as ever: fat researchers, especially those using a research justice frame.

I could make Freedom of Information requests to find out how much the public research on this list costs, but life is too short. Let's just assume it isn't cheap. As for the others, I can only guess at the amount of time and money these people waste. They are truly a burden and need to be stopped now before they do any more damage.
Posted by Dr Charlotte Cooper at 12:49 3 comments: