I went to Detroit. I first went to the city in 2001 and this was my fifth or sixth visit to the place. Detroit is changing. There is still a lot of poverty, there are still ruins, but a demolition programme, the shutting down of essential services, including water and sewage, is forcing social cleansing on a massive scale. There are now areas of gentrification that would have almost been unthinkable 13 years ago. Detroit, a city of working class black people, is becoming a magnet for gentrifiers who consider it a new frontier. The city's problems are both unique to Detroit and an indication of what is happening in neoliberal cities elsewhere. I was struck many times during my visit by the similarities between Detroit and where I live in East London. I love both places.

Here are some snapshots from my trip: 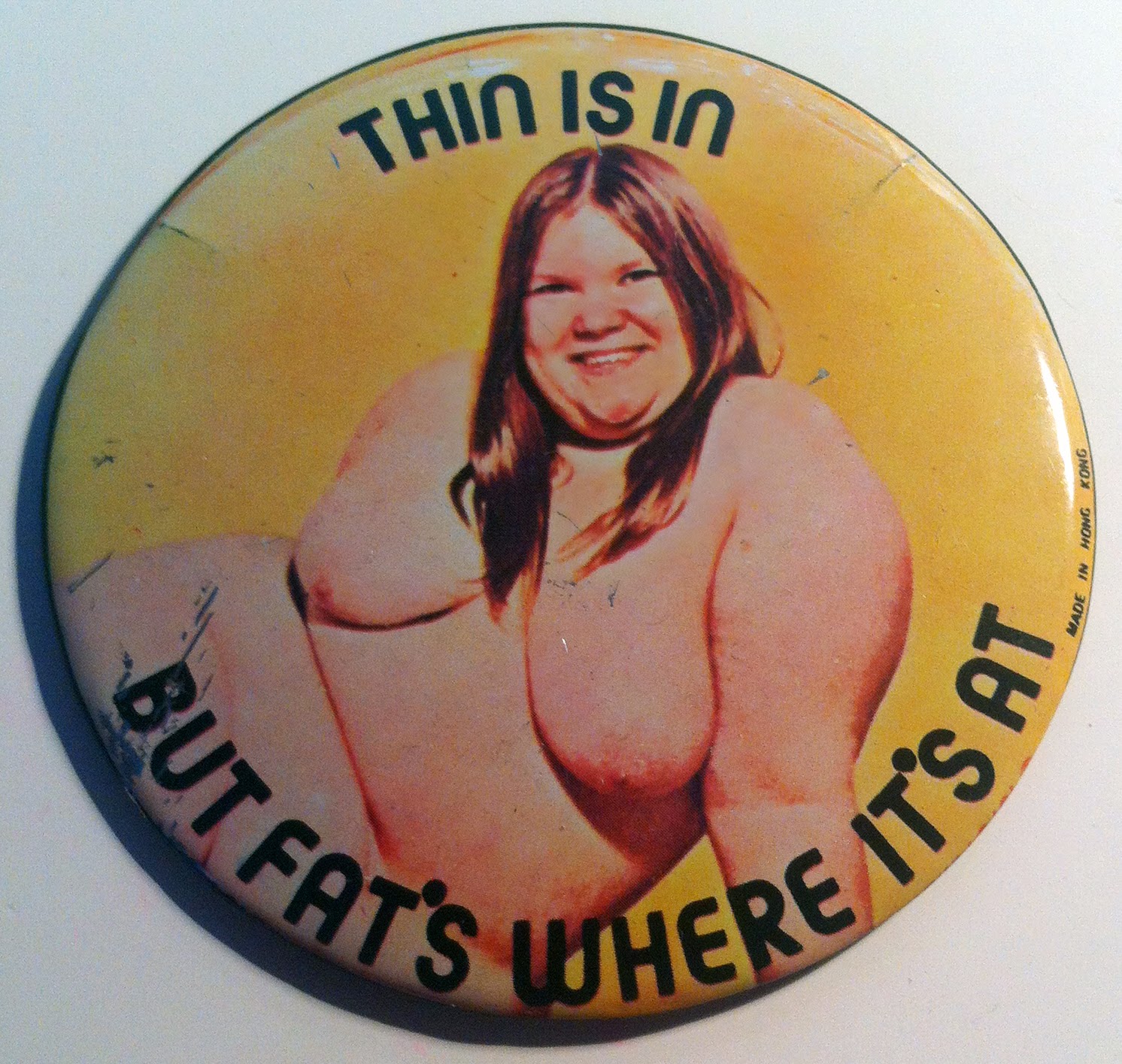 a) My friend Amanda Piasecki met up with my love and I and we hung out for the weekend. A fat guy passing by laughed openly at us squeezing out of the small car I had rented. "That's a tiny car!" he spluttered. "Yes it is!" we replied.

b) Amanda gave me this really big badge. The woman on it looks familiar to me, who is she? Someone from the early days of NAAFA? I like how plain and unglamorous she looks, like a fat hippy or a student. The badge says "Made in Hong Kong" in tiny letters on the side, which dates it, I think, to the late 1960s or early 1970s, when Hong Kong was exporting cheap manufactured goods to the US. I think it's amazing that this badge exists at all. Historic fat culture. What a gift! Thanks Amanda.

c) I got to see some Midwestern fat friends and to eat at the wonderful fat and queer-friendly Bona Sera café in Ypsilanti. I felt nourished by Bad Fairy's grits and the homemade gelato on the menu as well as the conversation and camaraderie. We talked about fat community, class, stupid stuff too. I often feel the burn of community, but this was not one of those times. 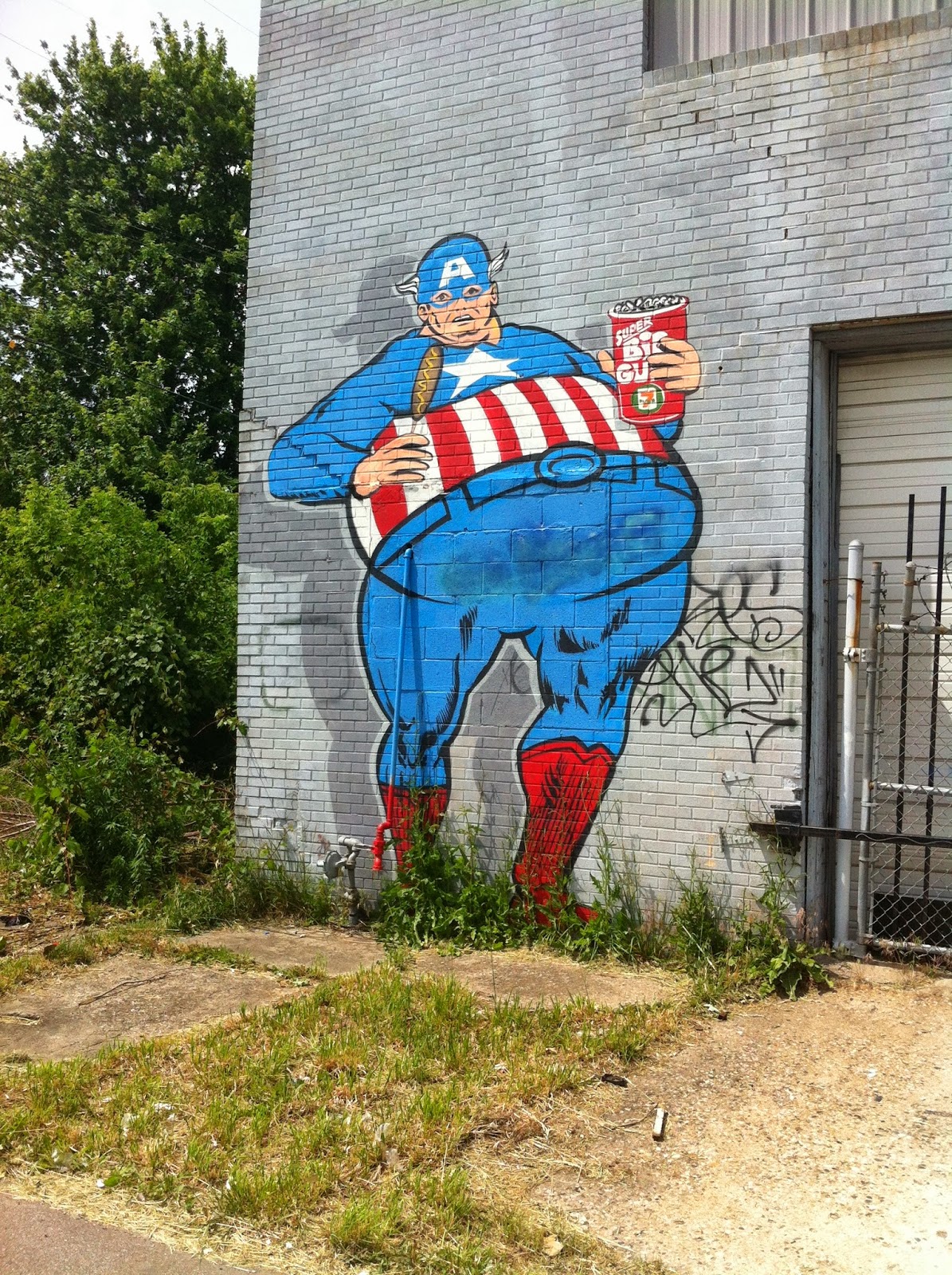 d) The Grand River Creative Corridor at Core City has some stunning street art, including this, which inspires a lot of feelings in me. I have no fondness at all for Captain America, so I'm always glad to see him as a satirical object. I get that he is representing a broken dream of America, he's painted on a wall in a run-down area bordering a more gentrified neighbourhood. Perhaps this painting heralds the start of more gentrification. His fatness here is complicated. It's a product of fast food consumption, I recognise a fatphobic and patronising view of Detroit as a food desert and am mindful of how this rhetoric is used to leverage the presence of gentrifying corporations (a Whole Foods – an upmarket supermarket – has recently opened not so far away). I read this fat as weak, bloated, abjected. It reeks of fat panic. I wonder who painted it, are they fat? What does it mean to see a depiction of fatness like this in such a fat city?

e) We went to see the fantastic band Speaker for the Dead at the Trumbullplex, an anarchist house and venue. One of the band's members is called Charlie V. Stern and they are a stand-up comic as well as an accordionist. They did a set and began with this line: "Your Mama... your Mama she's so fat that no one can look her in the eye because we live in a fucked up sizeist and ablest society". I couldn't believe what I was hearing. I was probably the fattest in the room, Stern is not particularly fat but maybe identifies as fat, I don't know. I was amazed that fat activist discourse could have filtered in to a right-on joke by a stand-up in an anarchist performance space. I thought: "Things are changing."

f) I went to visit the Joseph A. Labadie Collection at the university of Michigan, which is open access, meaning that members of the public can go and look at things for free. The Labadie is a collection of radical left archival material, including papers, journals, magazines, ephemera, t-shirts, badges, all kinds of things. There is a lot of queer stuff in there. Their holdings on fat are not excessive, but they did have a beautifully preserved copy of the Proceedings of the First Feminist Fat Activists' Working Meeting, April 18-20 1980, New Haven CT. This was a report prepared by Judith Stein, and illustrated by Beryl-Elise Hoffstein. It was distributed by Fat Liberator Publications. I found this document very moving to read, so many of the concerns of 1980 are relevant today. It was also funny and full of spark, for example "Goals and Priorities for the Fat Liberation Movement" include: "build a feminist fat culture;" "burn Jean Neiditch (head of Weight Watchers) in effigy;" "have public demonstrations of fat people's strength and endurance;" "Defence squad against hassles (Fat Terrorist Society)" – sounds a bit like The Chubsters to me.

g) I went to Detroit to attend the Allied Media Conference (AMC). This is an annual affair dedicated to grassroots social justice media-based organising. Yes, that's a mouthful. It's a really big conference, with many workshops, practise spaces, panels, performances, delegates and things to blow your mind. Some of these things are convened under 'tracks,' special collections of sessions on a particular theme. I was interested in several of these tracks but the ones most relevant to this post are Research Justice and Abundant Bodies Media. You can read notes and Tweets from the sessions via the AMC website.

I attended the Research Justice Network Gathering, a mini-conference that took place before the main event. Regular readers of this blog will know that I have been getting interested in decolonising obesity research and that I used RJ principles in the project No More Stitch-Ups! Developing Media Literacy Through Fat Activist Community Research. The Network Gathering was a powerful reminder of the political nature of research, and a call to action in creating more just and inclusive methodologies. I came away from the gathering with a firmer understanding of the harm that obesity research injustice causes, and a commitment to develop harm reduction strategies around that stuff. I found it very helpful to think of this work taking place within a wider agenda calling for accountability, it can be very alienating doing this work, it's good to know that those of us who do it are not alone.

Abundant Bodies Media is the first time there has been a dedicated fat track at the AMC. This is somewhat surprising to me since the conference has a strong healing Justice presence and there are many fat people in attendance. The eight sessions in the track focussed on creative practice, inclusive community-building, sexuality, intersectional bodily autonomy, anti-assimilationist and online fat activism. Not bad! It was exciting to participate as a panellist and a presenter, working with groups of younger fat activists, a mixture of those new to the movement and more seasoned players.

I understand that not everybody had as positive an experience of the track as me. There were problems with accessible seating throughout, and getting around the conference venues was not straightforward. Although the AMC is a radical and visionary space, fat politics remain marginal and unknown to many of its participants, some of whom tried to discredit the track and its participants. This echoes the ongoing problem of fatphobia in the left, a subject I've written about previously. I witnessed these interactions, for example: when I mentioned the track to someone in an interview they said that they hoped it would focus on healthy eating; another person did not understand the rationale for a session and lectured some of us on the causes of obesity, framing us as pathological in the process. The AMC is an overwhelming experience at the best of times and people were often absent, me included, trying to cram in as much as possible across all of the tracks. This meant that Abundant Bodies Media, and probably other tracks too, tended to feel fragmented and it was hard to build a solid activism base.

Despite the problems in putting together an inaugural track, I hope that Abundant Bodies Media will continue. It was well-curated and shows that there is clearly a hunger for a fat presence in this radical space. There are bound to be glitches as the track gets going, developing community takes time and hard work. Whether or not people have the energy to invest in this remains to be seen, but I want to leave this post now by quoting the Allied Media Projects Network Principles in full, because they are really powerful, full of hope, and might offer those involved some kind of comfort for the work that lies ahead.

"We are making an honest attempt to solve the most significant problems of our day.

We are building a network of people and organizations that are developing long-term solutions based on the immediate confrontation of our most pressing problems.

Wherever there is a problem, there are already people acting on the problem in some fashion. Understanding those actions is the starting point for developing effective strategies to resolve the problem, so we focus on the solutions, not the problems.

We emphasise our own power and legitimacy.

We presume our power, not our powerlessness.

We focus on strategies rather than issues.

The strongest solutions happen through the process, not in a moment at the end of the process.

The most effective strategies for us are the ones that work in situations of scarce resources and intersecting systems of oppression because those solutions tend to be the most holistic and sustainable.

We encourage people to engage with their whole selves, not just with one part of their identity.

We begin by listening."
Posted by Dr Charlotte Cooper at 15:43