It's not just the doctor that dishes out the fat talk, now the vet does it too 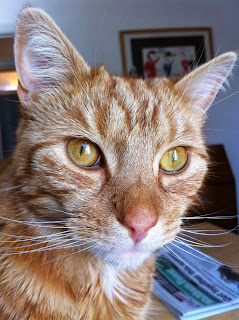 This is Pip, also known as Mr Pip, Pippin, My Little Ginger Prince, Tiny Man and so on. My girlfriend and I are his people and he has many friends down the street. Sometimes he comes home smelling of old ladies' perfume. We adore the li'l fella, feed him, stroke him, play with him and sometimes we take him to the vet.

I first wrote about the pet diet industry in an article for the short-lived Yes! (a mainstream British women's mag about fat) in 1997. Don Kulick also wrote about this in 2009, and there may be others that I've missed since then. At the time I felt I was really avant garde in having identified this little niche, but this was before the Obesity EpidemicTM kicked in at the turn of the century and pets became an extension of weight loss industry rhetoric. Now you can't move at the vet's for charts, scales, special expensive food, and a general air of uneasiness about fat pets. I imagine there are TV programmes dedicated to this stuff too, and only a matter of time until some series like Emergency Obese Cat Weight Loss Surgery spawns its own z-list celebrity universe. This stuff is everywhere.

Last night it was time for the Furry Man's flea jab. The vet cooed over him and said that he was perfect. She gave him his jab and inspected his teeth. Then she weighed him and told us sternly that he is at his optimum weight now that he has fully grown and he mustn't put on any more. Then we packed him back in his hated travel carrier and took him home. 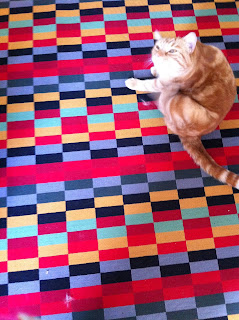 This is not the first time that a vet has given my fat girlfriend and I the stern talk. The last time Pip had his jab, a different vet at the same surgery expressed surprise that the cat wasn't fat. He'd assumed that because we were fat, we'd be bound to have a fat pet too. Even though Pip isn't a fat cat and looks unlikely to get fat any time soon, we still got an earful about the importance of maintaining a 'good' weight.

It's very weird witnessing how cultural anxiety about fat is enacted upon an animal. It's also very weird how that anxiety is transmitted to pet owners, especially fat owners like us, by vets. Do they see themselves as our doctors too? Should I relate to them as health care professionals? It makes me wonder what kind of treatment fat owners of fat pets get, and if this has already become a mirror of the grim experience of being fat in the (human) clinic more generally. It also echoes the rhetoric about fat parenting and fat children, exemplified over the past couple of days by a new witless wonder in the news opining that "parents are to blame for fat children."

These experiences with the vet highlight how unreal obesity epidemic rhetoric feels to me. It's a kind of going through the motions, a make-work project that has nothing to do with my cat's well-being, or my own, but which is reproduced in the strangest and most pernicious ways. 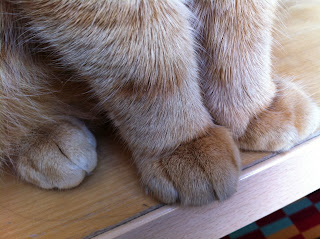 PS. Yes indeed, I have peppered this post with cat pics in a brazen attempt to up my viewing stats. Busted!
Posted by Dr Charlotte Cooper at 12:18 No comments: