That orangey dot in the middle of the picture is me onstage being given my Doctorate at the University of Limerick in Ireland. The photo was taken yesterday. I am about to be 'capped,' that is, to have a fancy velvet hat put on my head, which marks my formal entry into the upper ranks of academia.

At the point that this picture is being taken, the Vice President is reading out the title of my thesis: 'Fat Activism: A Queer Autoethnography.' What you can't see is me beaming with delight that the words 'fat,' 'queer' and 'activism' are being treated with extreme gravitas to a large auditorium packed with people. I'm glad that these magic words were spoken and acknowledged in this really formal setting. Fat queer activism – not a joke! 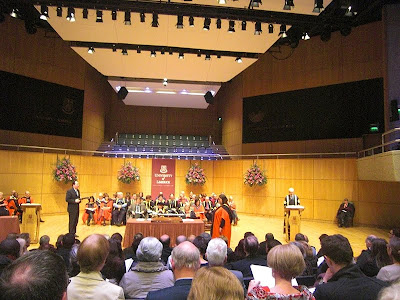 How fat people see and are seen

I know every day brings the latest horror in relation to the misery of fat hatred, we're all horror-ed out, in a heightened state of panic and distress, and that's how it's supposed to be under the terms of the Obesity EpidemicTM. But there's always room for another serving of disgust so here’s some more of that latest, courtesy of the Wall Street Journal, which reports that diet competitions at work are a growing trend.

There is little of any coherence I can add to this article. Let's stop now. Let's drink some brandy together and give each other foot rubs to ease the pain. There is no longer a future for any of us, or our children, or their children. Team diet competitions at work, a growing trend in corporate America. Your body, your mind, those sacred things you thought would always be yours; relationships with people; your ability to be a useful person in the world; hope and hard work for a better future: it's all gone now. The Man has won.

I lie down, I die quietly and without fuss.
Posted by Dr Charlotte Cooper at 22:16 6 comments:

Representing fat in the news, no changes for 100 years

It's with trepidation that I propose that the worst of the New Year's blizzard of weight loss crap is over for now, nevertheless fat will most likely continue to be a rich source of media pap, it's a guaranteed news hit.

The World Health Organization's original fat panic report was published in 2000, but it hit a spot in the public psyche so perfectly that, 13 years later, agents if public health, media, and government, and everybody inbetween, are still running around like Henny Penny. Fat is a perpetual crisis about to break, but it's also an old story, and what strikes me about the New Year blizzard is the repetitive nature of the stories.

The Labour Party's latest proposal to introduce limits on food high in sugar, fat and salt is reminiscent of the fat tax trope that will not die. A tax on fat bodies, and foods presumed to cause people to be fat, was first suggested in the 1940s in the US, it has surfaced pretty much every decade since then and, since the Obesity EpidemicTM, more regularly still. Only Denmark has actually tried to implement this policy, with – surprise surprise – messy results. It's unviable but still mooted, and is only one of many repetitive news stories about fat that crop up time and time again.

I just spent a happy hour poking around the digital archives of British Pathé, the news service of yesteryear. There are quite a few of their vintage newsreels online depicting fat people and weight loss. What's amazing to me is how many of these clips resemble more recent media, and yet they were produced many years ago, in some cases nearly a hundred years ago. The appearance of the fat news story is as old as film news itself, perhaps it's as old as news.

I've rounded up a few clips to illustrate this point, with their Pathé descriptions. Sometimes the cataloguers comments are quite illuminating, they worry that the clips are exploitative, or not politically correct, which gives some indication of how the context has changed. Others point out how funny the clips are, which suggests that the idea of the fat body as innately hilarious is as alive and well as ever.

There's an insatiable hunger for depictions of fat people's bodies

Fat kids especially, but also very fat individuals, and better still when there's a fat person and a small or thin person together. These clips remind me of the preponderance of shockumentaries on TV that pruriently display fat bodies. The people in the films aren't really doing anything, just being shown as fat or, in the case of Strange Happenings, embodying a stereotype. Where there's a commentary it is generally patronising or dehumanising.

There's no shortage of clips showing fat people trying all kinds of bizarre things to try and lose weight. Their bodies wobble and shake, they are the butt of the joke, which is that everybody knows these interventions are useless. Weight loss surgery programmes are the modern equivalent of these clips. Fat bodies are made available similarly for a prurient and curious gaze. The stupidity (today: grossness) of the treatment is a central part of the story, a cautionary tale?

By the postwar period, normatively sized people also appear in these stories.

Can it be?! Fat people can be agile and feminine, patriotic, heroic and manly?! Apparently they can! Scoop! Scoop! The coverage of the Fattylympics last year is reminiscent of this, and I've also seen news reports about fat synchronised swimming groups, and fat dance troupes.

Fat people can be agents of their own lives but only within restrictive activist contexts, usually relating to consumerism, normative beauty ideals and fashion

The postwar consumer boom in the UK inspired a slew of clips about the outsize fashion industry that foreshadow not only the glut of TV makeover shows, but also the newsworthiness of the fatshion movement as consumer activism. The clips are problematic, for sure, they retain their prurience, and the emphasis is on hiding fat women's bodies and making them socially acceptable. But the connection is there, I think.

These two films are the Pathé newsreel equivalent of the YouTube clips of fat cats that you forwarded to all your friends.

Before I finish, here's one from the archive that didn't fit in. Check out Eve! A complete anomaly from 1922. A fat woman as the star of this strange little film. Anyone want to try and explain this one?

In linking to all of these clips, I want to show that the news about fat that is taken as truth and internalised is merely a story, and an old one at that.

I want the news, and the media more generally, to reflect better stories about fat, to produce stories that engage with the complexities of fat identity, politics and culture. This stuff is fresh and interesting, there's no need to rehash the same old reductive nonsense again and again. Editors and journalists, citizen reporters and bloggers, please get to it. Oh, and PS, I am available for hire to tell these stories.

Thanks to British Pathé.
Posted by Dr Charlotte Cooper at 13:58 4 comments:

The predictable new year dose of fat panic kicked off today with widespread reporting of the Royal College of Physicians' (RCP) latest missive, complete with a plethora of headless fatties from the picture archives. The RCP is a charity that represents physicians and, according to its website, "takes a wide role in public health". Action on obesity: Comprehensive care for all, by one of the RCP's working parties, states that the current response to obesity by the NHS is "patchy" and could be resolved by a number of proposed initiatives.

Reading the report is like a journey into Opposite Land. The work is well-meaning, but it exists with a framework that is profoundly problematic. For example, it is hard to disagree that current service delivery for fat people is really poor, particularly for those who undergo weight loss surgery, and that there needs to be proper auditing, quality control and monitoring of all obesity treatments.

But the report, as is typical in a medicalised discourse of fat, is entrenched in a view that regards weight loss as the universal solution to the problem of fat people and health. The authors throw about "severe complex obesity," a term they're obviously pretty proud of, coming soon to a healthcare provider near you, and bound to further medicalise and stigmatise fat people. They make the crucial mistake of failing to question the effectiveness of weight loss at all, so it's not weight loss surgery that ruins fat people's health, it's the fact that the care pathways surrounding the surgery need tweaking. This ties them up in all kinds of knots, looking for answers in the wrong places, for example suggesting that the UK needs a Michelle Obama figure to galvanise the population against obesity, even though her crusade in the US has been disastrous in re-stigmatising fat kids, and even though we've already seen Jamie Oliver screw things up over here.

The report, its press release, and subsequent reporting, reiterates the usual stale fat panic rhetoric about demographics and increasing body weight, and reproduces the inconsistencies of this argument. An estimated cost of £5 billion per year is placed on 'obesity', based on secondary reports, all of which also estimate the cost or propose costs based on irrelevant evidence (I checked their methodology). This figure is therefore a fantasy. More confusingly, Action on obesity: Comprehensive care for all criticises these costs, whilst making a prolonged case for spending more on obesity treatment, presumably because that's what puts the bread and butter in its members' tables. It's nonsense.

This report is an example of obesity research which eschews a research justice framework – more about that in posts to come – but which makes a big honking noise about being for the benefit of humanity. But work like this, cynically capitalising on new years anxiety about fat, is a load of hot air, a waste of space, that serves no one but the members of the RCP, least of all fat people.

If the RCP were really serious about fat people's health, they would be investing in health at every size research, developing fat activist communities, and pioneering projects such as medical self-advocacy, anti-discrimination work, and other low cost, low risk initiatives that have proven track records in increasing fat people's well-being. But that's just crazy talk, isn't it?

Action on obesity: Comprehensive care for all