When I was a teenager I had a pen pal called Phil who sent me cassettes of things he liked and which I ended up liking too. One of these things was a home-taped copy of Jello Biafra's prankish spoken word album No More Cocoons. I haven't heard it in years but could probably still recite most of it by heart. In one of the sequences Biafra talks about collecting names for bands so, say you've got a great band but you can't think of a name, you can get one from Jello because he's got more than he can use. Perhaps there are bands out there somewhere that he named: Republican Buttocks, The Imperial Turdsicles, was there Facelift In A Jar too? Maybe I just imagined it.

Thanks to Simon Murphy and Kay Hyatt for helping with this list.
Posted by Dr Charlotte Cooper at 22:43 3 comments:

FatBooth is an iPhone app that adds a digital double chin to a picture of your face and makes thin people look sort of fat.

I've avoided this phenomenon largely because I don't own an iPhone, and I already look fat because I am fat. Some of my thin online friends have been playing with it recently and posting their pictures on Facebook, so now it's suddenly become a lot more present to me.

I was offended when I first saw the pictures and the comments after them, all consisting of onomatopaeic laughing and what looked like people choking with mirth. The digital double chins remind me of fat suits, more specifically Marisa Meltzer's article comparing fat suits to blackface. It's also a weird reversal of the headless fatty, where fat people are just as absent from the discourse surrounding the image as with pictures where our heads are cropped away. I felt that FatBooth is an appropriation of ersatz fatness, of people like me, and that a digital double chin tells you nothing at all about what it's like to be fat, it just turns it into a joke.

I went on to wonder if my authenticity as a 'real' fat person mattered. I was once told in the past that I was not fat enough to have a stake in fat politics (by an author who lost weight, wrote about it and still maintains their own stake in the matter, ahem). Anyone can talk about fat, I don't have the last word on it, it's important that people of all sizes engage. What makes this tricky is that fat people are very often made silent by obesity discourse and that fat hatred has widespread negative material effects on the quality of people's lives. A group of thin friends making a joke of a pretend double chin will never replace my lived embodiment, you could argue that it's not supposed to, a joke is just a joke, but I think a joke says more than that.

Seeing people's FatBooth pictures was like witnessing thin people's prurient obsession with fat embodiment. I thought: "This is how they see us when they can't conceive that we would see them doing this, or feel implicated in their actions, they are so profoundly immune to our daily grind." Imagining flesh on your bones is a real thrill when you don't have much of your own. It's a dangerous thing to imagine.

Following this, I tried to think of FatBooth as a tool that people use in different ways. I never thought of my Facebook friends who used FatBooth as fatphobic, so I tried to think about how non-fatphobes might use it, or if it was possible to use FatBooth without being fatphobic. I wondered if FatBooth could be something that enables people to think about fat in radical or progressive ways. Could it inspire empathy? Could it enable thin people to imagine themselves fat with no moral connotations? Could it enlighten?

If people using FatBooth lived in social contexts where there was no war on obesity, or endemic hatred of fat, then these things might be possible. But FatBooth appears to me as entirely a product of fatphobia, the way it frames the act of imagining oneself fat is intimately tied to dominant obesity discourse. FatBooth presents fat as funny, pitiful, fearful and Other; fat is something pathologically added-on to authentic slenderness; fat people are not recognisable as humans with agency, thoughts and feelings of their own, let alone politics, community, creativity or rage. If there are radical applications for FatBooth, I want to hear about them – but I won't be holding my breath.

PS. This post got some diet company spam which made me laugh because it missed the point of the post heroically. Here's the text: "Nowadays people who have normal weight seem unnatural and not normal! Obesity is considered almost as a normal condition! And this thing with the iphone is just not cool!" Keep going spam-drone...
Posted by Dr Charlotte Cooper at 12:17 4 comments:

I just spent the weekend making Bad Art at the Researching Feminist Futures conference in Edinburgh. For two days I sat at a table and made stuff with three other members of The Bad Art Collective, a group we formed earlier this year, and various delegates who dropped by during the event to make some Bad Art with us. We had paper, pens, glitter, felt-tips, macaroni, lentils, pastels, scraperboards, glue and other media too, plus a lot of Blu-Tak to stick everything we made to the wall.

People have different ideas about what constitutes Bad Art. At the conference people variously related to our Bad Art table as a project of irony, or a relaxing retreat from workshops or presentations where the 'real' work takes place. That's not how I see it at all. Drawing, making things, talking, cackling, working collectively, that's the space where things happen. I loved the moments at the weekend when people started to get over their insistence that they can't draw or 'aren't artistic' and contributed to the larger project. Better still was when what they produced made them laugh and want to do more. A felt-tip becomes a weapon.

Our project was called Bombarded By Images and the idea was to critique the often-heard truism that women develop terrible body image because they are constantly bombarded by images in the media. We wanted to show that we are more than capable of making an abundance of our own images, and to think about and do activism that is creative, productive, full of agency and bad attitude.

Because of our theme, and because the four of us are grounded in fat activism and Fat Studies to a greater or lesser extent, a lot of what we produced was about fat, resistance, anger, fat culture, bad feminist art about bodies, being anti-social, inexpertise, enjoying stupidity. Drawing stupid/not so stupid pictures was a true delight, it opened up a space that was beyond rational-critical dialogue, where we didn't have to play by the rules of politeness or propriety.

It's a couple of days later now and I've been thinking about that feeling. I love fat activism that is weird, grotesque, anti-social, and I feel sad that this kind of activism is sidelined or barely acknowledged or known compared to the 'real work' of changing laws, addressing inequality, righting wrongs. Those kinds of activisms are fine, I'm glad people do them, but they don't make my heart sing, and don't speak to my politics and cultural touchstones, which are of the punk, queer, anarchist variety. I think activists should consider ethics and do what they can not to support oppressive hegemonies, and I don't think you have to be po-faced about it; I like activism that makes me laugh a lot, that is prankish and evil.

Just now my friend sent me a link to Slavoj Žižek's rambling account of the London riots in August, stupidly titled Shoplifters of the World Unite. He's as windy as you'd expect an overly-lauded ageing white man academic to be, but I like his remarks about the irrationality of the riots as a form of protest. It made me think that, amongst its many qualities, Bad Art can also be thought of as a form of 'irrational' activism, fat or otherwise. The pictures and objects we made aren't waiting for anyone's approval, or official sanction by committee. Sometimes they make no sense to anyone else, or they grate, they don't behave or speak nicely, or engage politely with the other side. But they make sense to us and they make us happy, they're full of life and humour and intelligence, not to mention imaginative possibility and power. They resist and create simultaneously.

I feel excited by these ideas, and I expect I will come back to them. Full documentation of Bombarded By Images is coming as soon as I can make time to stick it on the Bad Art Collective blog – you'll just have to wait. Meanwhile, here's one of the things I made at the weekend, inspired by The Warriors, The Chubsters, The Ramones, and the Manson Family diorama that used to reside in the Chamber of Horrors at Madame Tussauds! Coloured pencils forever. 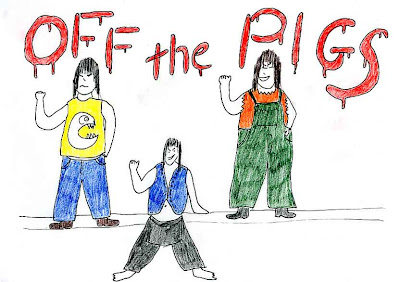