It's really hard to blog the third ESRC Fat Studies and Health At Every Size seminar because I was one of the main organisers and I have little critical distance. I still think it's worth saying a few things about it, despite being deeply embroiled in its production, or maybe especially because of my closeness to the event.

One of the things that I have enjoyed very much about this seminar series is that it has been a friendly and welcoming interdisciplinary space for discussion. I've felt that the meetings have been instrumental in developing a strong Fat Studies community in the UK. I hoped that this seminar would continue in this way, and I knew it would be special because it was a space that was intentionally open to activists as well as scholars, not that the two are mutually exclusive. As well as the seminar being free to attend, we offered bursaries for people on low incomes so that they could travel to the gathering. We moved outside university space and held the seminar at Stratford Library, a deliberate move to create access for people who would not normally go to an event like this, and dialogue between different groups.

I've included a list of all the speakers below. I don't want to go into detail about each presentation, all of them were really interesting, useful and powerful in their own ways. However I will talk briefly about some of the more outstanding moments of the event, offered here as my personal opinion rather than in any official capacity as co-organiser of the seminar.

I felt very proud to have been able to give a platform to such a variety of speakers, including people who had little previous experience of either presenting at an academic conference, or in Fat Studies. It was great to hear Caroline Walters talk about representations of fat BDSM without having to make any apology or give a defensive Fat 101 context for her work. I was also delighted to see Kay Hyatt present an account of the Big Bum Jumble and explain why it was a significant example of fat activism. This kind of work, also referenced at the seminar by Stacy Bias, is completely unexamined in the academy yet offers such rich material for analysis.

Two presentations stood out for me in terms of the way they incorporated emotion, namely anger. Anger is not central to my own work, but it is an element of it, it's a kind of energy that fuels a desire for disruption and change. I think any kind of emotion is somewhat taboo in academia, as scholars we are often expected to produce cool analytical work that somehow exists beyond the realm of earthly human emotion. In this context I think it was very brave that Dr Kim Singleton and Dr Samantha Murray made reference to their own anger about fat hatred. Sondra Solovay's keynote also referenced a more muted anger at the unjust systems within which she works. Perhaps one of the qualities of interdisciplinary space is that it enables people to take a risk and present challenging work. Either way, it feels very freeing to be able to bring 'unpleasant' emotion to our work, to be real about who we are and what we do, that seems quite rare and valuable within scholarship.

For me the highlight of the seminar was the triple whammy offered by Dr Samantha Murray, Dr Rachel White, and Mike Wyeld on Friday morning. I can't remember ever encountering such a beautifully subversive trio of work on fat. Sam critically addressed what can be a problematic construction of fat activist identity and constituency through subversive methodology. Whoa! The nerve! Rachel subverted widely-held rationales for fat activism by talking about The Chubsters. Be still my beating heart! In 30 minutes she articulated one of the ways in which I think of fat activism in a way that I have never been able to do for myself. I felt so happy and free and proud to see her discuss my work like that, profoundly encouraged. One of the more difficult elements of the seminar was the screening of the Swedish film Thank You From Heaven, about anti-fat bullying, and I felt that Rachel gave us the tools to deconstruct this work and invest in more liberating kinds of activism. Mike helped create much-needed dialogue between Bear culture and Fat Studies and fat activism. He subverted the invisible and pernicious rules that keep these cultures separate. It's no understatement to say that I hunger for sophisticated work like this that takes fat activism seriously.

Another highlight for me was showing everyone the Fat Queer and Trans Timeline that was collectively produced at NOLOSE last summer. The discussion surrounding it, which involved thinking about what the Timeline represented and how it could be developed, was a total thrill. As my friend has just emailed me: "Where else can you see four metres of queer trans fat activism laid out before your eyes? Literally nowhere!"

Finally, I programmed some extras into the seminar that ended up working well. Bill Savage/Dr R White displayed a series of handmade posters from Unskinny Bop; Sarah Tilley, an award-winning bookseller, set up a Fat Studies bookstall; I brought the Chubuzzer for people to play with; there were zines and badges; Kay brought some leftover Big Bum Jumble for people to rummage through. It's a rare conference where you end up with a new outfit.

There's one more ESRC Fat Studies seminar in the pipeline, which will take place next spring in Bath. Given the desperate funding climate in universities at the moment I wonder if gorgeous seminars such as these will get a look-in in the future, or if this is all we'll be able to muster. I'll try and remain hopeful that more rad fat space might still be carved out in time. 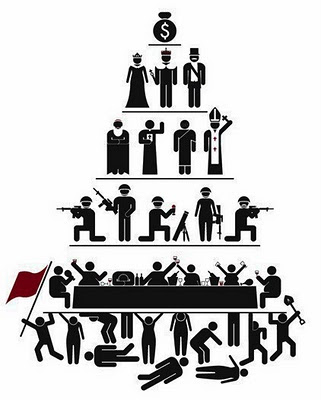 Just a quick note about representations of fat and class.

I saw this image today, I don't know who it's by, so can't credit it. It's an updated version of a much older Pyramid of Capitalist System illustration produced in 1911 in the Industrial Workers of the World's newspaper.

I was intrigued to see that the bourgeoisie is represented as entirely fat in the modern version, but not so much in the older illustration. There's a slightly portly stuffed shirt, but the rest of the older gang are normatively-sized.

Why do you think this is?

My suspicion is that fat stereotypes of laziness, greed, and corruption have more currency today than they did in the past. My friend Bird la Bird commented that if the more recent image was a truer depiction of class embodiment then it would be the proles who are fat rather than the middle class.

I'm annoyed by this image, to me it represents the failure of many people in the radical left to question pernicious stereotypes. By representing fat in this way they also fail to consider the ways that class (and other attributes) intersects with different kinds of struggle. I kind of feel that it's a self-hating image too, what is so wrong with depicting heroic class warriors as fat? They've tried to show women. Alas, analyses of race or disability or sexuality, to name but a few things, are also missing from this image, as though they never have anything to do with class. It's really limited.

There's another similar illustration worth remarking upon too. It's busier and more complex, but sure enough, one of the capitalists at the top is kind of chunky, the fattest person in the image. It's hard to see the detail clearly in this link but there doesn't seem to be much in the way of diversity represented. I love prole.info but you'd think they could represent some working class disabled people, for example. No fat people in their working class! Maybe they're just dependent on the available clipart and its limitations to make this image. Still, it sucks.
Posted by Dr Charlotte Cooper at 11:21 6 comments:

This is Chubster turf

Posted by Dr Charlotte Cooper at 12:09 No comments: 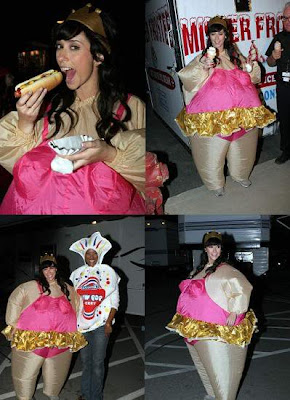 One of my friends posted pictures of Jennifer Love Hewitt's unfortunate Halloween costume and it got me thinking about a few things.

That Jennifer Love Hewitt would want to present an ugly stereotype for laughs is emblematic of the way her own body has been presented in the popular media. She's been called a 'lollipop' in the tabloids on account of her skinniness, and has also been harassed for weight gain. No wonder she appears to be obsessed with fat. Her behaviour is disappointing, but then again she's a hack actress whose actions have little bearing on my life, I don't really care what she does, and maybe she just doesn't know any better. It's vile but I'm mostly indifferent.

One of the things about carnivals and holidays is that they represent a time where the usual social rules are relaxed. The appeal of a holiday is the potential for freedom and anarchy. It also means the gloves are off, politeness doesn't count, it's the rule of the Id. I think this is one of the elements that convinces white people to think it perfectly appropriate to wear racist Halloween costumes, for example. But I think it also helps explain the interest in sex and death that is so central to this holiday, and the lampooning of upright society.

Fat is clearly part of this. If fatness represents all that is reprehensible, no wonder attention is drawn to it during a festival of all things gross. Jennifer Love Hewitt's costume reminds me of the ways that fat women's bodies are both invisible and hyper-visible, we're public property, a site of cultural entitlement to know us, unknowable freaks that we are. Show your fat body! Jiggle it around! Make a spectacle of your flesh! That's what it's all about.

This has led me to think of other contexts where the social rules about fat and propriety are skewed in terms of having a public body. I had a conversation recently with another fat woman where we talked about how our nieces and god(less)daughters, and other girl children in our lives, were fascinated by our fatness. I've had experiences where I'm poked, where my shirt is lifted to expose my belly and tits, my belly button is of major interest, and some kids seem to want to grab my arse. The boundaries around this kind of bodily contact are really unsettling and it's a constant fight to maintain them and ensure everybody's safety. I don't always like being touched like this, and it can be hard for a child, especially one who has little contact with fat people, to hear me say "No." Yet I also want the children in my life to grow up without a mystified concept of fat as Other, I want a fat body to be real, knowable and acceptable to them. Plus it's fun to play with the full fat heft of my body, I like to wrestle.

I have no conclusions to make about this at the moment, it's hard to talk about because it involves policing a boundary between that which is fun and safe and that which is dangerous and improper. I'd welcome your thoughts.
Posted by Dr Charlotte Cooper at 11:36 14 comments: