LighterLife: was Lucy Prince a casualty?

Do you really think that replacing your meals with a sachet of powder is the best thing to do for your health? Ever wondered what might happen if, for example, you were drinking powdered milkshakes instead of food, under the mistaken fantasy that this supplies all your nutritional needs, and your potassium levels dropped? This is what happened to Lucy Prince, who has just died.

Was Lucy another LighterLife casualty? None of the news reports online mention the name of the very low calorie diet she was following, only that she had replaced meals with powdered shakes. That sounds like LigherLife to me, though it could also be the Tony Ferguson Weight Loss Programme and Diet Plan, currently getting the heavy sell from Boots, or any number of other very low calorie diets on the market. I wonder why the name of the product that probably contributed to Lucy Prince's death was left out of reports?

Samantha Clowes, Jacqueline Henson and Matilda Callaghan are three women who have died in the last couple of years who were also LighterLife customers. LighterLife refutes claims that there is any connection between their deaths, these women died because they were 'morbidly obese', or had pre-existing health problems. Even though there is evidence to the contrary, fatness is regarded as a an expressway to an early death within current medical thinking, which means that there is little impetus to establish a correlation between very low calorie diets and mortality.

Companies such as LighterLife have a financial interest in developing obesity research which ultimately helps them sell product. They do this with the help of various health professionals and organisations such as the National Obesity Forum and TOAST (remember them?). This means that independent research on the relationship between very low calorie diets and mortality in fat people is even less likely.

This is a terrible situation. How many more women, who just happen to be doing LighterLife or its equivalents, are going to die until these dangerous diets are outlawed? Yeah, I'm angry about this, aren't you?
Posted by Dr Charlotte Cooper at 16:27 4 comments: 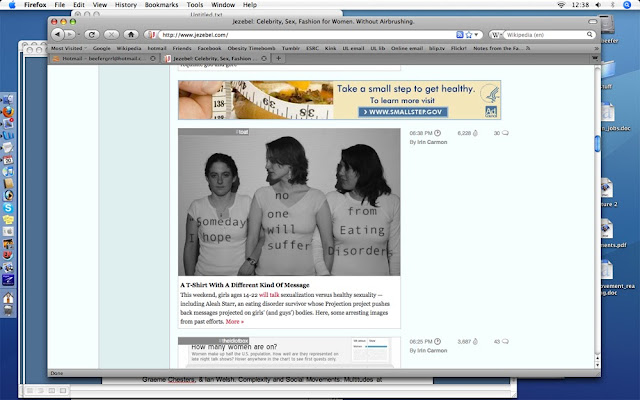 I like how this screengrab I took from Jezebel.com today illustrates some of the contradictions and tensions in talking about fat. Yeah, that's my desktop.

An article about a critical grassroots campaign about eating disorders is capped off with a diet advert. The diet ad is framed as a 'health' intervention, but it uses the visual cliché of a tape-measure around food that is being presented here as 'unhealthy' – a burger, classic visual shorthand for out of control eating/root cause of obesity – and thus in need of control. It looks like an official US government intervention, I didn't click on the banner so I don't know. Given the sponsorship of such campaigns by weight loss corporations, it can hardly be considered a neutral public service announcement, even though it masquerades as one.

On the one hand Jezebel is taking the laudable position of supporting campaigns that help people with eating disorders, which I think is related to fat activism, but on the other it profits from diet culture.

I don't think this is deliberate, I think Jezebel's editors are interested in helping develop critical responses to fat, 'obesity' and also eating disorders and the kind of body stuff that affects women. Sometimes they're right on the money, and sometimes I think their analysis is a bit sketchy, but this is to be expected from a populist site, I think they do pretty well considering. I've mentioned these kinds of banner adverts before to Jezebel and they've sent me apologetic responses and promises to do something about what they too see as a problem.

Meanwhile these adverts persist. I don't know much about how internet advertising works, but I suspect the adverts I'm seeing are provided by a third-party ad-server and reflect my nationality, based on my IP address, and possibly my presumed interests, eg based on the things I click on. It's likely that the adverts you see will be different. Because weight loss is such a perfectly-formed consumerist product, it makes sense that these are the ads that appear above an article about eating disorders. There's no equivalent advert for fat lib right now, though there may be in the future and that will also be problematic.

I don't know how much say Jezebel's editors have in deciding what kind of adverts appear on their site, perhaps very little. The content on Jezebel.com is also contingent on the business requirements of the parent company, and its context within an online marketplace.

What interests me is the inconsistency of the message from Jezebel, how this is likely out of the editors' control, and thus how difficult it is to produce strong, ongoing analyses of fat embodiment within popular culture without being undermined by wider economic-political systems.

It suggests an explanation about why fat activism is also an inconsistent social movement. In many ways I think this is good and right, it's pluralist rather than monolithic which means that it can be relevant to a lot of people. Yet I still yearn for consistency; clear, straightforward ideas that help people feel better and help me make sense of things. I think this might be wishful thinking and it's possible I might be happier if I could embrace the chaos a little more.
Posted by Dr Charlotte Cooper at 13:39 2 comments:

Next week is Fat Talk Free® Week, an American sorority campaign (financially?) supported by some eating disorder groups, and businesses that include at first glance a financial planning service; a cosmetics company that sells anticellulite, anti-ageing and anti-wrinkle products; a handbag company; and a pilates studio with a website that features a bunch of skinny and muscular white body beautiful types prancing around in leotards. The idea is to stop the verbal denigration of fatness so that people can feel better about themselves. Fat Talk Free is a registered trademark.

This campaign is managing to synthesise many things that I dislike about some kinds of fat-related activism. I'm going to spell them out:

Censoring is ok
This campaign implicitly supports the idea that it's helpful and appropriate to shut down some kinds of talk, and therefore thought. It encourages people to police each other's language and thoughts. The suggestion is that if we don't think or verbalise these awful self-hating things, they will go away.

Censoring things does not make them go away, it usually drives that thing underground, or makes it shameful. We know that secrecy and shame are not a good basis for personal development, or embodied liberation. This is particularly true for groups of people who suffer eating disorders, who this campaign partially targets, who themselves are already steeped in secrecy and shame.

Fat talk is painful to hear in other people, and particularly maddening to witness in places where you cannot escape it, especially at work. But shutting people down because you hate the way they talk does not make the problem disappear. Do you want to be told not to talk about certain things? I don't, I wouldn't want to inflict that on other people and I wouldn't presume to be the person who decides what kind of talk is or isn't acceptable for anyone. Censorship is always a bad idea, whilst respectful dialogue and learning to be with people who are different to you are more compassionate and fruitful ways to manage these situations, to name but two peace-building strategies.

Capitalism is your friend
Where to start? The trademarking that transforms young women's activism into another branded marketing opportunity, or the weird collection of sponsors? Why is this thing trademarked? How transparent is an apparently neutral community campaign aimed at young women that relies on a trademark? Why is this campaign sponsored by companies that sell goods and services that apparently contradict its assumed body-positive messages? Is it inconsistent to participate in Fat Talk Free® Week and then buy a load of anticellulite(sic) product? I think so, but these people don't, it's all one big happy marketplace to them.

Our betters know best
I can't be the only chippy class warrior that resents Fat Talk Free® Week as a project of middle class privilege represented by the sorority system. I also resent the universalist assumptions presented within this very American institution, not just in terms of class (and maybe race too), but also nationality. We're not all the same, though this neoliberal censorship campaign masquerading as grassroots activism has assumed the 'proper voice' because of its access to power and has given itself the entitlement here to speak for everyone.

It's about, er, what?
Eating disorders, body image, and fat lib concepts are all jumbled together as though they are the same thing that is experienced homogenously.

Don't hate us
Not to support this apparently benign campaign is to risk being branded a hater who just doesn't understand. This is a form of social control and, I suspect, a feature of censorship. I'm expecting some testy comments on this post.