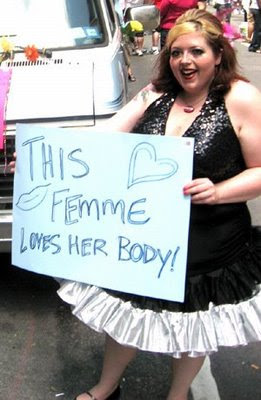 On those days when you're feeling a little wishy-washy about life in general, you could do a lot worse than to stop, wonder what Bevin Branlandingham might do if she were in your situation, and take note.

This queer fat femme icon is the convener of the excellent and free podcast FemmeCast, she's got confidence, courage and smarts coming out of her ears, is the perfect blend of frothy and fierce, and I bet she can tell a good cupcake from bad too. Bevin is usually to be found at the centre of things in New York and New Jersey, surrounded by her femme family, and it's hard to talk about her without using the word Fabulous. Check her out…

What does femme mean to you? I realise this could be a massive question, highlights are acceptable.

First, I want to acknowledge that Femme is something different to absolutely everyone who identifies as Femme. And I leave it as a self-identification. For me, being Femme is a lot of things:

Femme is a way of defining for me how I fit into my sexuality.

Femme means my feminism and my femininity walk hand in hand.

Femme means I look how I want to look and not how someone tells me I should look to be perceived as queer. You'll know I'm queer within about 20 seconds of talking to me.

Femme means I look how I want to look and not how someone tells me I should look because I am a woman. I am often far overdressed for everything I do, but when I look in the mirror and smile because I'm wearing a glittery necklace, feathers in my hair, lots of cleavage, that's what matters.

Femme means I stand in solidarity with every other self-identified Femme, Butch, and gender warrior out there.

I also identify fiercely as a Femme Shark, read the manifesto!

It is about finding a way to be a girl that doesn't hurt (This is from my friend Leah Lakshmi Piepzna-Samarasinha's keynote speech at the Femme Conference last year).

And another great quote from the Femme Conference (this one from my hero Dorothy Allison): "A femme can teach you how to run through broken glass in heels."

I'm intrigued as to how femme might be read or experienced differently across different cultures. I think the book Femmes of Power illustrates some of those differences, but I'm wondering if you have any thoughts about femmes in the US, ie what distinguishes American femmes from femmes elsewhere?

Well, that's really hard for me to say because most of the Femmes I know from other countries are artists and performers, and I think we are a different breed of people entirely. But of those artists and performers, I know them to be a lot more comfortable with gender bending and using elements of masculinity in performance, both of Femme in art. I see Femme in general moving towards the blending of gender and being much more than just the utilisation of tropes of standard femininity and playing with a lot of different presentations. I think that Femmes in other countries were ahead of the game with this.

Who are your favourite queer fat femmes, and why do you love them?

Beth Ditto is a longtime hero of mine. She has long challenged the notions of cute and fashionable. She was the first famous example of a queer fat femme I knew of (playing to a crowd of 50 in Philadelphia, not nearly as famous as she is now). I was in awe of her owning her sexuality and hotness, and never apologising for it. Seeing someone else do it who was younger than me only inspired me to hurry up and get through my fat shame and start making something of myself. Also have you seen the sweater dress with the face on it in her new line for Evans? That's enough to get my love right there.

Dorothy Allison is so amazing. She's got a gift with language and insight that is phenomenal. Her writing is incredible and if you ever get the chance to see her speak it will feel like she has fisted your soul. I got to interview her for FemmeCast about being Femme in the 70s and 80s and she used to code Femme in all sorts of interesting ways, like wearing a flannel shirt with a lacy bra showing, or studding a leather jacket with earrings she got at thrift stores.

Heather MacAllister is another one of my heroes. She was a fat activist, burlesque performer, founded the Fat Bottom Revue in San Francisco and was so fiercely in her body, unapologetic and had a deep respect for herself and other humans. She died a couple of years ago and I am working on an oral history project about her life and work because I think it's important to preserve our history as fat activists, queers and femmes and also because I find so much of myself in who she was and what she did.

Christine De La Rosa is one of the chairpeople of the Femme Conference, founded Butch-Femme.com, is a community leader and activist and probably one of the nicest and most dedicated people I have ever met. She moved to Oakland last year, decided that they needed an LGBT community centre and is now managing Velvet, a once-floundering lesbian bar, turning that into a community space while she works on the centre. I have so much awe for her drive, integrity and inspiration.

The rest of my favourite queer fat femmes are all of the incredible creatures that identify as queer fat femmes. To paraphrase my friend Sarah J on the first episode of my podcast: in a racist, sexist, mysoginist, fatphobic world, being a queer fat femme is an act of bravery. I feel blessed every day that I get to count many of the queer fat femme community leaders and artists in this world my personal friends and part of my femme family.

Why did you make FemmeCast a podcast?

A couple of years ago I was languishing in a law career that I wasn't loving and a friend of mine posted to her LiveJournal a quote about finding your golden skill – something that you love doing and should build a career around. My partner at the time joked that mine was talking. I took him seriously and decided that I wanted to do a podcast.

I had been a performer and producer for years, but the work I was doing (drag, burlesque and comedy) was a lot harder to stage in New York in a way that was financially accessible to audiences. I thought that doing something that was free and easily accessible to people who didn't live in big metropolitan areas and could affect the ways communities connected would be something fun for me and hopefully entertaining for my listeners.

I love the way that FemmeCast mobilises a mixed bunch of friends, and that not all contributors identify as femme. What tips do you have for other people wanting to do activism with their pals?

First of all, thank you for noticing that not everyone identifies as Femme! It was important for me to put a mix of folks on there (not all of us are fat, or female identified either) because I think Femme is enriched by our whole community, including our allies, friends, fans and lovers.

Well, what I do is I make it REALLY easy for my friends to participate. Producing one episode of FemmeCast takes me about 40 hours. But for my friends who are contributors, it takes them about 10 minutes per segment (and they're not in every episode). Unless we do a roundtable then it's maybe 20 minutes. The hardest part is usually scheduling.

I also think I try to work with people's strengths, so with some contributors we set it up as a conversation and with others it's a monologue where I give them prompts. And sometimes I just solicit specific pieces from writer and performer pals, like: "Hey will you record that thing you already worked on for the podcast?"

I use some of this philosophy in other community groups I am part of. I'm the Head Madam of the NYC Femme Family. I specifically set up the organisation with a leadership philosophy to utilise the energy and strengths of people who are coming to the table. So, for example, I didn't say, "we need someone to fill this specific role," I asked the people interested in organising: "What role do you think you'll be good at and what are you interested in doing for the organisation?" People are willing and able to give a lot more time and energy doing things they like to do, and are good at, rather than something they struggle with or find boring. And when you're doing something for free, which community organising often is (especially as you get into more and more marginalised identities not flush with cash), it's important that it be fun!

My life's mission is to make the world a safe place for all people to love themselves, regardless of their marginalisations. My career ambition is to have a talk show.

Find out more about Bevin through her website, queerfatfemme.com, and make a date for Fat and Queer, a community conference in New York City this autumn. Right!
Posted by Dr Charlotte Cooper at 15:21