Report: Invasion of The Chubsters 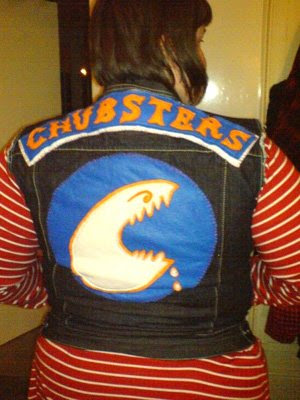 On Sunday 29 March I was part of an event at the London Lesbian and Gay Film Festival (LLGFF) called Invasion of The Chubsters. The Chubsters is my gang, remember? I want to write a little bit about what we did and what it was like. I welcome comments from anybody who was there who might like to say something about what it was like for them.

Jason Barker, one of the LLGFF programmers, approached me a few months ago about putting on a programme about fat queers for the festival. We agreed that a Chubsters-based event could be really exciting. We talked about using archive clips from the British Film Institute (BFI), who host the LLGFF, and showing a series of short films from current fat queer activists. We wanted to showcase The Chubsters, show the richness of fat queer culture, and make an event that was really affirming and encouraging. It was great working with Jason, who is a talented film curator, and he had really good ideas for how the event could play out.

The event lasted approximately 90 minutes and was completely sold out. Here's how it was structured:

As people were arriving we had a slideshow on the screen of Chubster members and icons. Then we showed the short Chubster film. Jason introduced three of us Chubsters; me, Weasel (aka Simon Murphy) and Butch Husky (aka Kay Hyatt). We didn't answer to our real names, instead we took to the stage in a surly and aggressive way, bumping into Jason and trying to intimidate him. We wore Chubster colours that we made specially for the occasion, based on the waistcoats that the protagonists wear in The Warriors, except with a Screaming C on the back. I showed the crowd how to do donut hands and encouraged them all to do donut hands back at us.

Butch H and I jumped Jason in by belly-slamming him to the ground and making him pinch more than an inch. His Chubster name is Trans Fatty.

These were:
Theme: the first fatties I even encountered on screen (Mavis Cruet from Willo The Wisp and Roland from Grange Hill, plus fatties in Carry On films)
Clip: Hattie Jacques as a soft butch in Make Mine Mink
Theme: a short history of fat activism
Clip: Fat Women Here To Stay, an amazing BBC Open Space documentary from 1989, made by the London Fat Women's Group.
Theme: the complicated relationship between fat people and humour
Clip: Hairspray
Theme: the apparent spilt between bear culture and the fat liberation movement, what the two could gain from stronger alliances
Clip: Hard Fat, a film about a queer gainer
Theme: Increasing complexities of fat queer representation on screen
Clip: Fat Girls
Theme: I can't remember! I was too excited and nervous! Stuff about Beth, I guess
Clip: Feminist, Nick Knight's clip of Beth Ditto.

Jason introduced Kori Klima, someone whose name I missed and Allyson Mitchell, whose short films were in the second part of the programme. Kori and the mystery person talked about their guerrilla film-making techniques and about how the film is about being strong in who you are. Allyson talked about Pretty Porky and Pissed Off, the fat activism scene in Toronto, and she paid tribute to me (major blush) and other activists who came before us.

Unfortunately we were not able to screen Naima Lowe's Nolose film because of technical problems. However, I have a few of the BFI's official programme notes from the screening. Let me know if you want a copy and I'll post one to you. Many of these short films and clips are available online.

Jason and I thanked various people, including "the motherfucking BFI" for supporting radical fat queers, and then Chopin Gard came onstage as Mama Cass and sang Make Your Own Kind of Music, with a prologue audio cut-up of diet talkclips from Gillian McKeith. As he sang, there was a spontaneous stage invasion by The Chubsters and members of the audience, everybody danced and sang along! It was incredible!

After the screening, Weasel, Butch H and I jumped in 30 new Chubsters. I'll update the site with their details soon.

It's hard to write about what the event meant to me because it was so overwhelming. It really felt as though our time in the spotlight had come! The BFI looked after us all, and were enthusiastic about the programme.

The feedback has been fantastic, many people were blown away by the event, including those who had never considered fat activism before. Some people said that it was the best event at the festival. I am still getting emails from those who loved it, some BFI staff got jumped-in as Chubsters, a BFI bigwig thanked us twice for doing the event, saying that this is exactly the kind of thing they want to deliver, even the projectionists were delighted at being thanked for their hard work. There is also footage of the event, which may become a news story. There are photographs, I will post them when I can.

But yes, what does it mean?

- Lots of people are so ready for talking about fat stuff and doing fat activism. They know there is something "out there" and there are opportunities for showing them exactly what lies beyond obesity epidemic rhetoric and fatphobia.
- A national British institution has supported us and might support us again in the future.
- It is really important that some fat activism is fun, inclusive and accessible.
- I feel profoundly encouraged and deeply inspired by fat culture, its histories and possibilities.
- There are already new activist developments in the pipeline thanks to this event, some of us are starting to think bigger. This is miraculous, in my opinion, knowing that we work with legacies of self-hatred, silencing and marginalisation.
Posted by Dr Charlotte Cooper at 12:38

Yes! This is thrilling to read about. "Make Your Own Kind of Music" indeed.

I am still finding it hard to describe it and what it meant/felt like - thanks for documenting it so soon and so thoroughly!

It is absolutely one of the best experiences of my life and so obviously significant and important. I am very, very proud to be a Chubster, as much as I am proud to be a chub.

My brain has exploded. I'm so glad that you were there and that it was such a good experience. Feels like payback for FSUK, hahaha!

Thanks for reporting on it! I am sorry I didn't get myself organised enough to get there too.